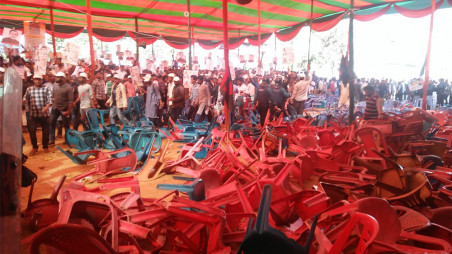 Two groups of Awami League (AL) locked into a scuffle at Laldighi ground just ahead of the triennial council of the party’s Chattogram district north unit began on Saturday morning.

The council of the AL’s Chattogram district north unit was scheduled to begin on the ground around 10:00am, says media report.

AL presidium member and lawmaker Mosharraf Hossain inaugurated the daylong council at 11:15 am.

At a time when the duo along with their activists was entering the venue, they locked into an altercation with each other, which triggered a scuffle.

The senior leaders of the party, at one stage, cooled down the situation with the assistance of police.