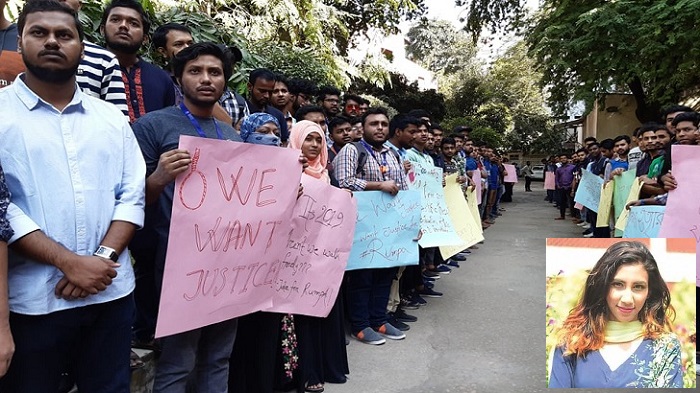 Students of the Stamford University (SU) staged demonstration on its Siddheshwari campus premises in the capital demanding justice over ‘killing’ of their fellow Rubaiyat Sharmin Rumpa on Saturday morning.

They also formed a human chain in front of the entrance gate of the university in this regard at 10:00 am.

They also chanted slogans demanding a proper investigation into the ‘murder’ of Rumpa and vowed to continue their protest on the campus ground until a proper autopsy report would be revealed.

On Wednesday night, Rumpa, 21, a second-year student of English department of the university, was found dead on an alley near her residence in the capital’s Siddheshwari area. Police learnt about the mysterious death incident next day.

Rumpa might have died after falling from a building, as they heard a thudding sound before finding her lying on the street, police said, quoting locals.

On Thursday night, law enforcers came to know that she is the daughter of a police inspector named Rokonuddin, who is currently working in a police camp in Habiganj.

Later, police filed a murder case in connection with the incident.