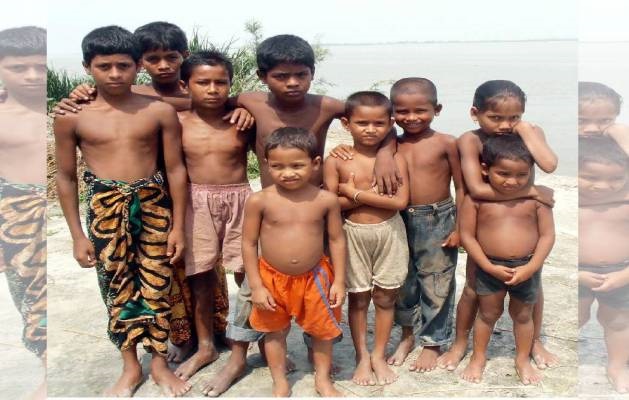 Some 200 children are being deprived of their basic right to education as there is no educational institution in Amtala Char of Chilmari Upazila in Kurigram.

Over 400 families have so far settled on the river island that surfaced around four years ago. Most of these families used to live in chars but were forced to move when the river devoured their homesteads.

Although a good number of people have been residing at the river island for several years, any educational institution is yet to be set up here, said Gausol Haq, the chairman of Chilmari Union Parishad.

Afsana, a young member of a newly-settled family, said she used to go to school during her family’s stay at Lal Chamar Char of Char Rajibpur upazila. The family took shelter at Amtala char after their homestead disappeared into the river.

“It’s tough to continue studies in the absence of a school,” she told UNB.

Rubel, another former student, said he grazes cattle and works in crop field instead of going to school.

To make things worse, the nearest school is located on Brahmaputra Char of Ashtamir Char union which is an hour’s boat ride from Amtala Char.

But distance and hazardous boat journey could not deter everyone. Nazim, a resident of the char, said some of them attend that school. “We've to start early in the morning to reach school in time,” he added.

However, dozens of children like Afsana and Rubel have no choice but to get involved in laborious activities after being deprived of education.

Residents of the river island feared that the children may get involved in anti-social activities if they are not provided with education. They urged the authorities concerned to establish a school there as soon as possible.

Enamul Haque, an assistant teacher at Dushmara Government Primary School of the upazila, said it has been several years since people started inhabiting in the river island. “Now, it’s essential to establish an educational institute to ensure that children get the opportunity to study,” he said.

When approached, State Minister for Primary and Mass Education Md Zakir Hossain said, “We’ll keep an eye on the issue so that those children don’t lag behind. A primary school will be established there, if needed.”