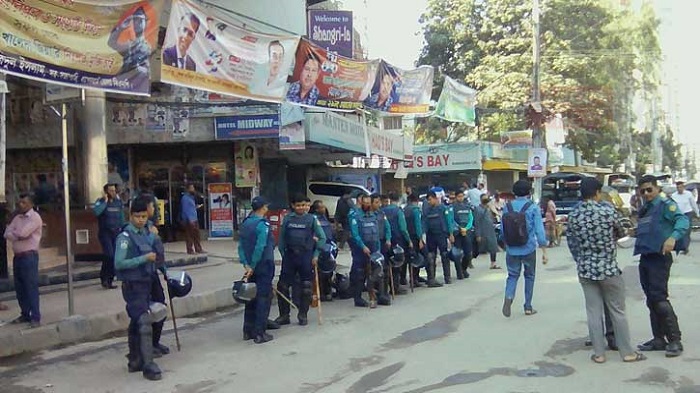 Additional police have been deployed in front of the headquarters of Bangladesh Nationalist Party (BNP) in the capital’s Nayapaltan area.

Members of law enforcement agencies in uniform and plain clothes gathered in front of the BNP office on Saturday morning.

It is believed that additional members of law enforcing agencies were deployed at the area amid the pre-declared rallies of the Jubo Dal.

Officer-in-charge of Paltan Police Station Abu Bakar Siddique said, “Additional police force has been placed as they (Jubo Dal) are going to hold a rally today. Police are deployed to maintain law and order situation on regular basis. Today is no exceptional. If anyone tries to create anarchy, police will take lawful and strict action.”

However, the leaders of Jubo Dal didn’t confirm where they would hold the rallies.

Talking to media, Jubo Dal central leader Giasuddin Mamun said, “Decision has not been made yet regarding the venue of the rally.”

Meanwhile, a joint meeting, presided over by BNP secretary general Mirza Fakhrul Islam Alamgir, was being held at the BNP office.

The BNP secretary general is set to hold a media briefing after the end of the meeting.