4 killed after US jewelry heist leads to carjacking, chase, shootout 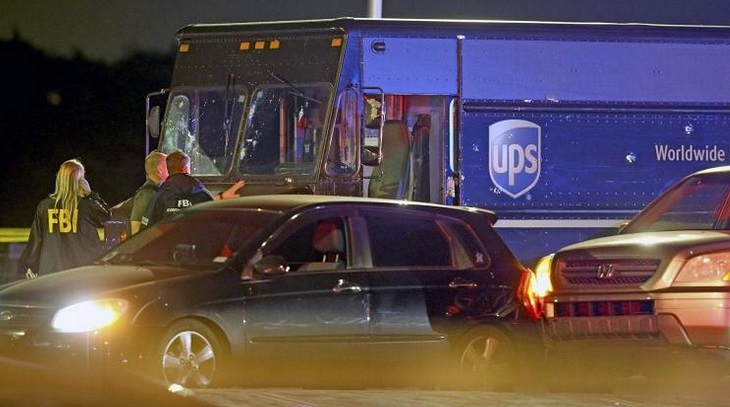 Two armed jewelry thieves trying to escape the scene of their heist on Thursday hijacked a delivery truck, took its driver hostage, then led police on a high-speed chase that ended in a deadly shootout, authorities in the US state of Florida said.

Four people were killed in the gunbattle on a busy street -- the two suspects, the driver of the United Parcel Service truck, and a bystander, FBI agent George Piro said.

"As the suspects left the area, they hijacked a UPS truck and kidnapped the driver," he said.

The suspects sped along an interstate during the evening rush hour, crossing multiple counties as law enforcement gave chase.

At one point, the police cars following the UPS truck stretched for approximately half a mile (0.8 kilometers) down the road, CNN said, with more than 40 emergency vehicles involved by the end of the chase.

A shootout ensued when the delivery truck was caught in traffic around 5:30 pm (10:30 GMT) in Miramar, about 25 miles away.

Police in Miramar tweeted that there had been an "officer-involved shooting" with "multiple fatalities," and that no law enforcement had been killed.

One person was taken on a stretcher into an ambulance, according to CNN. And another person was flown to a hospital by helicopter in critical condition, the South Florida Sun-Sentinel reported, citing the Broward County Sheriff Fire Rescue.

The intense episode was broadcast live on TV, filmed by news helicopters.

Images from the shooting scene showed dozens of emergency vehicles with lights flashing as the sun went down, all clustered around an intersection where the UPS truck had come to a stop.

Other cars could also be seen parked haphazardly in the street.

The FBI is leading the investigation, according to Piro.