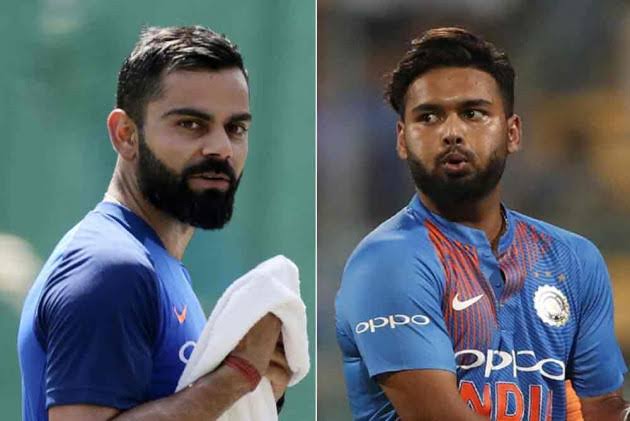 India captain Virat Kohli has come to the defence of under-fire wicketkeeper Rishabh Pant as he seeks a settled team to fight for the T20 World Cup in less than a year.

Pant had been seen as the successor to M.S. Dhoni, now established as one of the country's all-time greats, but pundits have turned on the 22-year-old in recent months.

Pant, already overtaken by Wriddhiman Saha in the Test team, has been criticised for throwing away his wicket as a batsman and some misses behind the stumps.

Kohli said that Pant has to work on his game but insisted that fans who call for Dhoni's return are "not respectful".

"It's the player's responsibility to do well, work hard," the captain added.

"But I think it's a collective responsibility of everyone around us as well to give that player some space to do that.

"If he misses a chance or something, people can't shout 'MS' in the stadium. It's not respectful because no player would like that to happen."

Despite the questions over wicketkeeping, Kohli insisted that India, who started a limited-over series against West Indies on Friday, are close to finding their best team for the Twenty20 World Cup next year in Australia.

India top the Test rankings and are number two in the 50-over format behind England but are just fifth in the T20 world standings.

But Kohli believes the ranking is not a true reflection of India's abilities.

"T20 is a format where you experiment a lot more things than ODI and Test cricket," so the "risk" is higher, said the captain

Kohli is now back with the squad after resting for the T20 against Bangladesh that India won 2-1.

"For us it's about figuring out who are the players that can make a transition into international cricket and this a good format to see them," said Kohli.

"Heading into the World Cup, rankings are going to be irrelevant because in T20 anyone can win on the day. I think our combination is getting stronger and stronger.

"We will probably be playing as close to the eleven that we want in the World Cup as possible for the remainder of the T20 games we have leading into the World Cup."