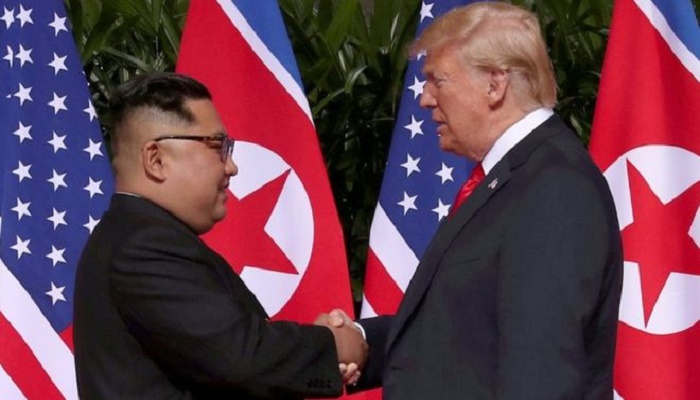 The foreign ministry said if Mr Trump was confrontational, it "must really be diagnosed as the relapse of the dotage of a dotard".

The North first called Mr Trump a dotard, meaning old and weak, in 2017.

It is the first time in over a year that Pyongyang has been openly critical of Donald Trump, the BBC's Korea correspondent Laura Bicker said.

The Oxford English Dictionary defines a dotard as "a person whose mental faculties are impaired, specifically, a person whose intellect or understanding is impaired in old age".

Dotage, meanwhile, is defined as "having impaired intellect or understanding in old age", or in general use as "old age".

The two men held face-to-face talks in Singapore in June 2018, and in Vietnam in February this year, aimed at denuclearisation.

In recent months the hostile language has also come back.

At the Nato summit in the UK on Tuesday, Mr Trump referred to North Korean leader Kim Jong-un as "rocket man".

He also said that the US reserved the right to use military force against Pyongyang.

In a statement carried by North Korea's state news agency, Vice Foreign Minister Choe Son-hui warned that the "war of words" from two years ago may be resuming.

In 2017, the two leaders engaged in tit-for-tat arguments, with Mr Trump dubbing Mr Kim "little rocket man" and "a madman", while Mr Kim called the US president a "mentally deranged dotard".