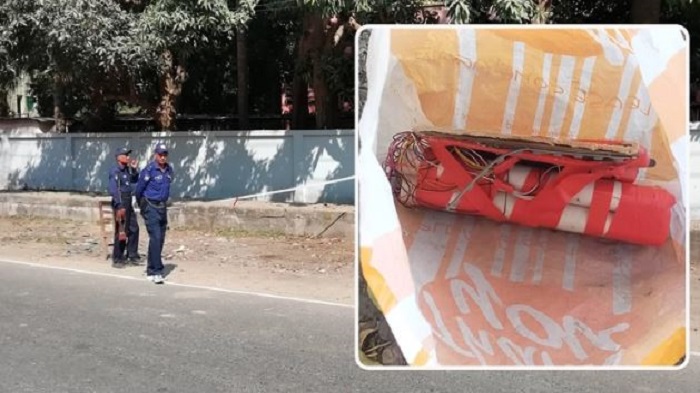 Police found a “bomb-like substance” in front of Meherpur’s executive engineer's office of Department of Public Health Engineering (DPHE) on Thursday triggering panic among the locals.

After being informed by locals, police men rushed to the spot at 11:00am and a team of Rapid Action Battalion (RAB) inspected the area.

They kept the area cordoned off till the filing of the report at 12:30 pm on Friday.

Police also recovered a chit from the spot. In the hand-drafted short note, the name of banned militant outfit Ansar al Islam was written.

Confirming this to media, Superintendent of Police (SP) of Meherpur district SM Murad Ali said, “The bomb-like substance might be kept to create panic and fear in people’s mind. We are primarily suspecting the substance is not a ‘serious thing’.”

“We have sought help from Bangladesh Army authorities. They are set to arrive in the spot by this noon and examine the object,” he added.