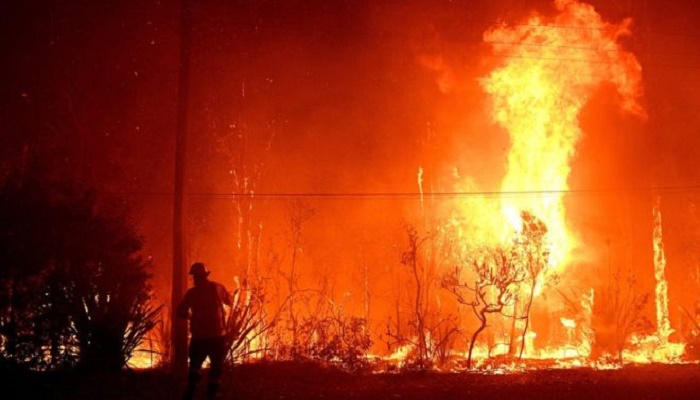 About 100 bushfires are raging in the Australian state of New South Wales (NSW), with the most severe forming into a "mega blaze" north of Sydney, reports BBC.

More than 2,000 firefighters are battling bushfires, which escalated in intensity late on Thursday.

Footage of one blaze on the southern fringe of the city showed firefighters fleeing as flames surged forward.

Australia's largest city has been blanketed by thick smoke all week, causing a rise in medical problems.

Since October, bushfires have killed six people and destroyed more than 700 homes across Australia.

The severity of the blazes so early in the fire season has caused alarm, and prompted calls for greater action to tackle climate change.

More than 1.6 million hectares of land in NSW have been burnt already. Fires have also raged across Queensland, Victoria, South Australia, Western Australia and Tasmania.

Bushfires are common in Australia, but this year's fire season is more intense and has begun earlier than usual - something meteorologists say is exacerbated by climate change.

Australia's Bureau of Meteorology says that climate change has led to an increase in extreme heat events and raised the severity of other natural disasters, such as drought.

The UN has previously noted that Australia is falling short of its Paris agreement commitments to cut CO2 emissions.