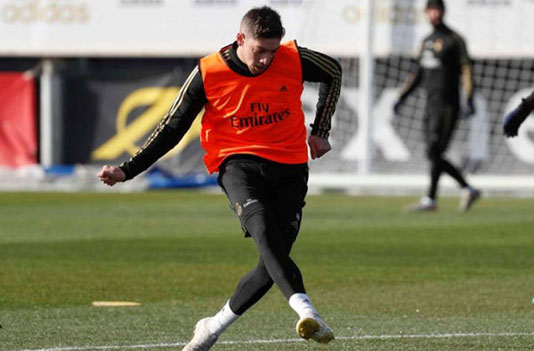 Zinedine Zidane pursued Paul Pogba but found Fede Valverde and his emergence as Real Madrid’s most important midfielder may yet prove the turning point in their season.

Signed for six million euros in 2016, Valverde cost around 200 million less than Madrid might have paid for Pogba last summer. As well as saving the club money, he might have saved their coach too.

Zidane, staring down the barrel in September, is flying high three months later. Madrid sit level on points with Barcelona at the top of La Liga and have secured qualification to the Champions League’s last 16.

They face Espanyol at home on Saturday ahead of a dead European rubber against Club Brugge, the kind of fixture Valverde would once have viewed as a rare opportunity to play in the team.

Instead, the 21-year-old has become a key figure in Zidane’s second era and, between Karim Benzema up front and Sergio Ramos at the back, the central cog in a newly-formed spine.

When Zidane talks about Valverde, he invariably darts to the English description, “box-to-box”, a phrase he clearly feels best suits the energy and dynamism the Uruguayan from Montevideo has brought to Madrid’s midfield three.

For years, Luka Modric and Toni Kroos had been the immoveable duo ahead of the more defensively-minded Casemiro, but their ponderous performances came to characterise a Madrid side that lacked spark and, perhaps, the motivation to go again.

Valverde has broken the partnership and added what was missing. His zip, athleticism and direct running offer Madrid the base from which they have been again able to dominate matches.

“He is amazing,” Kroos said last month. “I really love this player. To come here is not easy and to play like he is at this age means he has a lot of quality. I’m sure he has a great future here for many years to come.”

“He is improving like everyone else and he is doing well,” said Zidane, who had replaced Valverde in the 76th minute, before PSG scored in the 81st and 83rd. “But it’s difficult to play box-to-box for a whole game.”

Valverde missed the 3-0 defeat to PSG in September through injury. It was Madrid’s worst display of the season. Against Real Mallorca, Madrid’s only other defeat, Valverde started on the bench.

Zidane did not discover Valverde but, whether through luck or design, has overseen the period during which a promising youngster has turned into a first-team regular. – Turbulent year – He was schooled at Uruguay’s Penarol, a club he joined as a 13-year-old and where his sturdy frame above a pair of long, thin, legs earned the nickname El Pararito, “the little bird.”

Madrid signed Valverde in 2016 and gave him 30 games in the B team beforeValverde he named by FIFA as the second best player of the under-20 World Cup, behind England’s Dominic Solanke, now of Bournemouth.

A turbulent year on loan at Deportivo La Coruna, who were relegated, did more for his mentality than his game but he began to make his mark last season before exploding onto the scene in recent months.

“It’s incredible to be playing for such a big club with so much history,” said Valverde. “I dreamed of getting to play at the Santiago Bernabeu and I want to make the most of it.”

It is a mark of his status that Valverde is likely to be rested at some point ahead of the Clasico against Barcelona at Camp Nou on December 18, which could decide who holds first place over the Christmas break.

Lionel Messi, fresh from winning his record-breaking sixth Ballon d’Or in Paris, leads Barca against Mallorca on Saturday after scoring 11 goals in his last 10 games. Sevilla, in third, play away at Osasuna on Sunday.