Huge number of TIN holders yet to submit returns 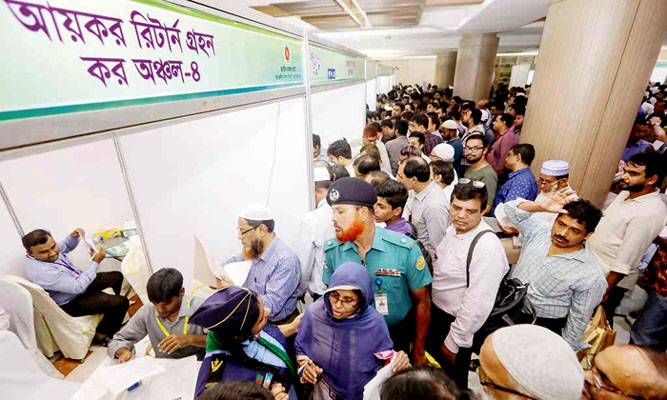 The number of income tax returns has so far increased by 0.1 million this fiscal year despite countrywide efforts taken by the National Board of Revenue (NBR).

They said the number of TIN holders is around 4.6 million until December 2, 2019, and half of them do not submit tax returns, as it is not mandatory for all TIN holders to submit returns.

He vowed to launch a move to ensure regulatory compliance of the taxpayers.

“We have already issued Taxpayers Identification Number (TIN) to some 0.6 million to 0.7 million new taxpayers through a countrywide survey. The tax officials have been continuing their effort to increase revenue collection,” he added.

Now the NBR will find out the taxpayers who did not submit tax returns despite having TIN or taxable income, he said.

“Field-level tax offices have informed me that the number of tax returns will go up to 2.3 million by the end of this year,” Mosharraf Hossain said.

He said some 359,000 taxpayers have submitted applications, seeking more time to submit their tax returns.

The tax officials said a large number of well-off people are not submitting tax returns, whereas the compliance rate is high among the salaried taxpayers.

Experts said some people find that there is no follow-up for not submitting tax returns. They want to avoid the hassle of tax return submission and facing queries from taxmen.

The wide gap between the number of tax returns and e-TIN holders has been persisting in the country for a long time, they said.

There is a lack of 'willingness' and 'ability' on the part of the taxmen to analyse and prepare a database (of the non-compliant taxpayers), they opined.