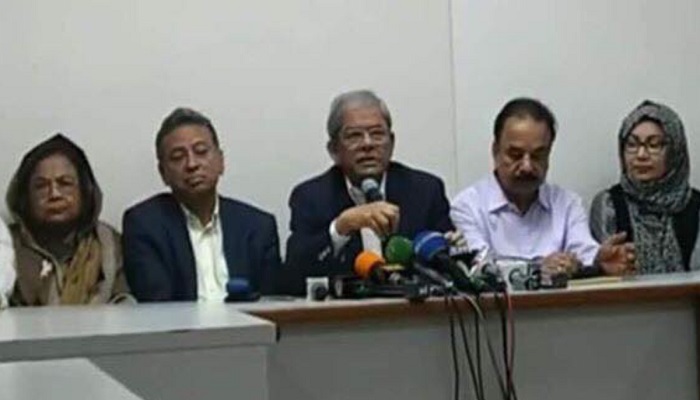 BNP on Thursday alleged that the entire nation has got aggrieved as its chairperson Khaleda Zia’s bail has been obstructed with the ‘direct interference of the government’.

“The entire national has not only got frustrated, but also aggrieved over the Appellate Division’s decision. Depriving a leader like Khaleda Zia of bail is against the traditional norms and also an inhumane behaviour with her,” said BNP secretary general Mirza Fakhrul Islam Alamgir.

Speaking at a press conference at BNP’s Nayapaltan central office, he further said, “We’ve come to know from the unofficial sources that the medical board’s report was finalised last night (Wednesday night), but her (Khaleda’s) bail was obstructed with the government’s direct interference.”

Earlier in the day, the Appellate Division deferred until December 12 the hearing on Khaleda’s bail petition in Zia Charitable Trust graft case.

The court also asked the medical board, formed by the Bangabandhu Sheikh Mujib Medical University (BSMMU) to treat Khaleda Zia, to submit a report on her health condition before it within December 12, as they could not present the report today as per the directive given on November 28.

Fakhrul said the BSMMU VC was bound to submit the medical board’s report on Khaleda’s health condition before the court by today, but it was not presented. “We think the BSMMU authorities committed the contempt of court as they failed to submit the report as per the directive of the court.”

Referring to the Prime Minister’s remark involving Khaleda on Wednesday night, he said Sheikh Hasina ‘directly’ interfered in the court with her comments on an under-trial case. “Being the Chief Executive of the State what she said is tantamount to direct interference in the judiciary and the contempt of court.”

Speaking at a meeting of the AL National Committee at the Gono Bhaban, Prime Minister Sheikh Hasina on Wednesday said Khaleda is in jail not in a political case, but in a corruption case for misappropriating orphans’ money.

She also wondered why some people are shedding tears over the treatment of a corrupt person like Khaleda who killed several hundred people by carrying out arson attacks.

Fakhrul said the Prime Minister’s comments exposed that she and her government does not want Khaleda to be freed on bail. “She deserves the legal right to be freed and it’s not a matter of anybody’s mercy. Usually, bail is granted by 7-10 days in such cases. But Khaleda is not given bail illegally out of political vengeance with a motive to keep her away from politics.”