"Slept on wooden board,stronger in spirit and body": P Chidambaram 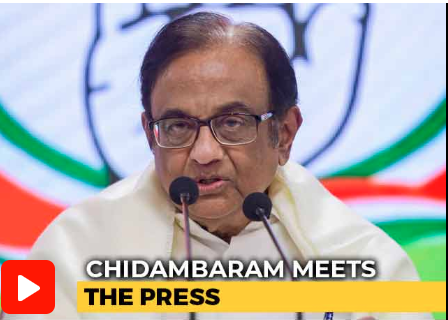 Indian Former Finance Minister P Chidambaram struck a defiant note at his first press conference since walking out of Delhi's Tihar Jail late Wednesday evening, declaring he had emerged "stronger in spirit and body" after 106 days of custody. Mr Chidambaram, 74, who has spent more than two months in jail, told reporters today that "my neck is stronger, my spine is stronger, my head is stronger" after sleeping on a wooden board (in jail).

The Congress leader, in his earlier bail requests, had highlighted his medical condition, with his family claiming that his medical treatment - he suffers from a number of ailments, including Crohn's disease - was not satisfactory. Family sources told news agency PTI P Chidambaram had lost around at least 8 kilograms since his detention.

The Congress leader, who has been granted bail by the Supreme Court in a money-laundering case linked to INX Media, also said that his family and he trusted in God and had "total confidence the courts will, ultimately, render justice".

"My record as Minister and my conscience are absolutely clear. Officers who have worked with me, business persons who have interacted with me and journalists who have observed me know that very well. My family trusts in God. We have total confidence that the courts will, ultimately, render justice," he added.

In a short but impassioned interaction with the media Mr Chidambaram ripped into the ruling BJP's handling of the economy.

"The government is making mistakes. It is wrong. Let me repeat, the government is wrong and they are wrong because they are clueless," he said, adding that every number pointed in the direction of a floundering economy.

The economy can be brought out of the slowdown but this government, he said, was "incapable" of doing that.

Earlier today Mr Chidambaram went to parliament, where he told reporters: "The government cannot suppress my voice in parliament". He also joined a protest by Congress MPs against the skyrocketing prices of onions.

Last evening, soon after walking out of jail, the senior Congress leader met party president Sonia Gandhi at her home.

"I am happy that Supreme Court has passed an order granting bail and I am happy that I have stepped out and breathing the air of freedom after 106 days," he told reporters.