The first comprehensive Bengali title on ethnic minorities in China 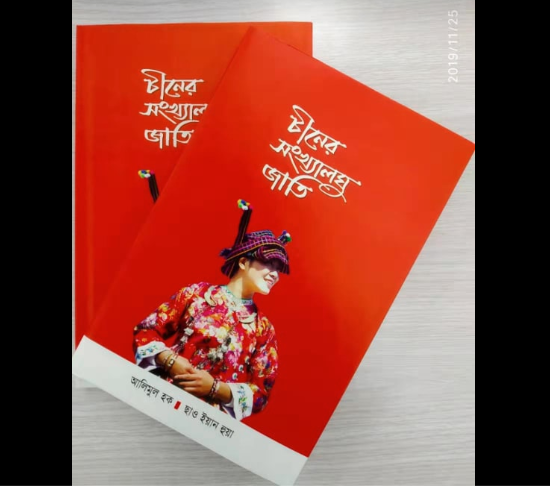 The names of journalists and writers-- Alimul Hoque of Bangladesh and Cao Yan Hua of China-- are so well-known that they need no introduction. Because through their innate flair of writing, they have already carved a special niche in the minds of Bengali bibliophiles. With several books to their  credit, the born-authors have been creating buzz among bookworms of Bangladesh for the last few years. The brilliant wordsmiths have found great name as prolific authors by writing and translating different basic books in the Bengali language.

Earlier, the author duo earned huge response and admiration of Bengali readers with their travelogue 'Chinmoy Cheen', the Unique China, last year. The huge success and response has elated the two seasoned journalists to come up with their new title 'Cheener Shangkhalaghu Jati', Ethnic Minorities in China, for their valuable readers. As expected, the new title has also been a hot-cake among the readers.

In my eyes, 'Cheener Shangkhalaghu Jati' published by the Color Creation is the first comprehensive book on ethnic minorities in China. By reading the title, Bengali readers can have a complete glimpse of ethnic groups in the East Asian nation. The book has shed light on the lifestyles of all 55 ethnic minorities in China. The prolific authors has successfully drawn brief descriptions of the Chinese civilisation of five thousand years in the book. Besides, They have proven their worth in portraying different religions in China including Buddhism, Taoism, Confucianism and Islam.

The recently-published title has listed a total of 55 ethnic minorities in China. However, it has mentioned that there are some 640101 more unrecognized  ethnic people in China who don't belong to any of the 55 ethnic groups recognised by the government. According to the book, a total of 8.41 per cent of total population of China are ethnic minorities. But they live across 50 to 60 per cent territory of the second largest economy of the world.  The minorities basically live in plateau, forests and grasslands of China. Inner Mongolia, Xinjiang, Ningxia, Guangxi, Tibet, Yunnan, Sichuan, Hunan, Hainan and Taiwan are the homes to most of the ethnic minorities.

Dedicated to the memories of freedom fighters of Bangladesh and China, the book has described that the autonomous policy of China for its ethnic minorities majority regions is one of the main beauties of the Chinese government system. There are seven autonomous regions, 30 provinces, and some 120 districts. Apart from them, China has 155 more autonomous divisions. A total of 44 minority groups, out of 55, enjoy autonomy all over the country.

The book portrays beautiful scenic spots of minority areas including mountain ranges, deep forests, rivers, and lakes which are  full of natural resources. It has further described costumes, foods, rituals, festivals, and history of the minorities. At least 53 groups have their own languages and, of them, some 21 groups have written languages. Besides, the authors have incorporated that every group has their distinct religious beliefs and rituals, and festivals. The Zhuang people are the largest minority group followed by the Manchu, Hui, Miao, Yi and Mongol. On the other hand, the Lhoba people, who mainly live in Tibet, are the smallest minority group as their number is around three thousand only.

According to the book, there are ten Muslim ethnic minority groups in China. Hui are the largest Muslim minority group. They mainly live in Ningxia Hui Autonomous Region of the northwest of China. But They are scattered throughout the different regions of the country. Other Muslim minorities are Uighur, Kazakh, Dongxiang, Kyrgyz, Salar, Tajik, Uzbek, Baoan and Tatar. After a thorough perusal, the book seemed to me to be a documentary evidence of religious freedom in China. Because anyone can have a deeper understanding and knowledge of the religious life of those minority groups in the book.

The 200-page book now available on rokomari.com can also be a perfect documentary refutal of the propaganda against China of so-called Muslim oppression in the communist nation. Because the book has described the life styles of ten Muslim majority ethnic minorities of China. It has shown how the Muslim groups have been enjoying their religious freedom and peacefully coexisting with other non-Muslim communities over centuries.

Finally, as both the authors are professional journalists of the Bengali Department of China Radio International (CRI), they have incorporated information about ethnic minorities of China in the book in such a way that I have found it not only the first comprehensive Bengali book but also the encyclopedia of the subject matter. The other salient feature of the book is that it contains 290 color photographs. It's really unbelievable that such an informative and quality book is up for sale at only 150tk.

The writer is the diplomatic correspondent of the Daily Sun. He is now based in Beijing.