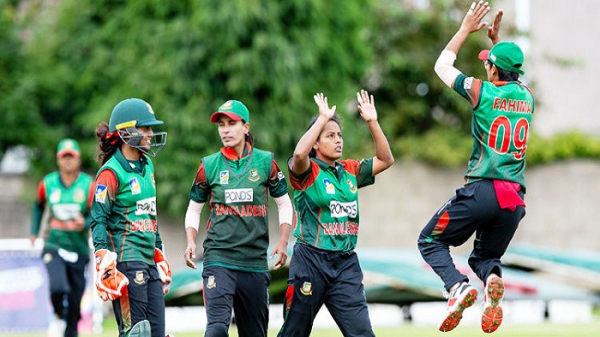 Bangladesh Women’s cricket team earned a historic win over the Maldives by 249 runs in their third game of the ongoing 13th South Asian Games (SA Games) on Thursday at Pokhara, Nepal.

Bangladesh won the toss and batted first. They posted a mammoth total of 255 runs for two wickets in 20 overs against the most inexperienced team of the event- Maldives.

Shamima Sultana and Sanjida Islam departed early in the game scoring only 5 and 7 respectively. But in the third wicket stand, Nigar Sultana and Fargana Haque recorded a massive partnership of 236 runs.

Both of Nigar and Fargana hit the centuries and they were unbeaten at 113 and 110 respectively. Nigar hit 13 fours and three sixes in her innings while Fargana decorated her innings smashing 20 fours.

In reply, Maldives were wrapped in only for 6 runs in 12.1 overs. Seven out of their 11 batters failed to score any run in the match.

Puja Chakraborty and Nahida Akter took 1 wicket each while two batters of Maldives were dismissed run-out.

Eventually, Bangladesh won the game by a big margin of 249 runs.

Earlier, Bangladesh women beat Sri Lanka by 7 wickets and Nepal by 10 wickets in their first two games. With Thursday’s win, Bangladesh ensured the final of the event which will be played on December 8 at the same venue.