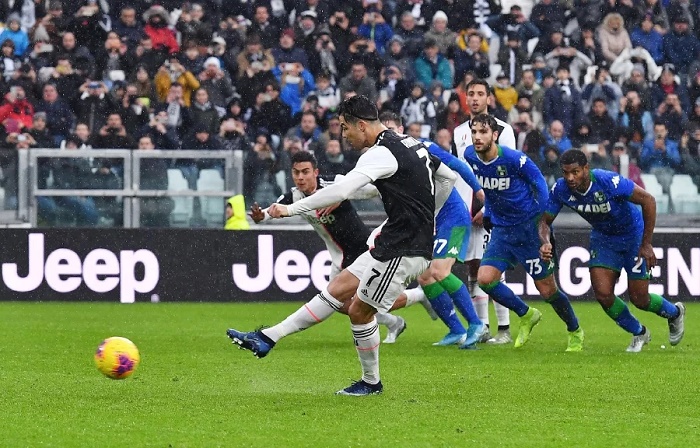 Both Rome clubs will test their Serie A ambitions this weekend against Italian league leaders Inter Milan and Juventus before next week’s Champions League action.

AS Roma kick off against Inter at the San Siro on Friday challenging Antonio Conte’s side who are riding high after knocking Juventus off top spot last week.

Champions Juventus remain unbeaten this season, but are now one point behind Inter before Maurizo Sarri’s side head south to take on in-form Lazio in the Stadio Olimpico, days before travelling to Bayer Leverkusen.

Cristiano Ronaldo returns to Serie A action after missing out on the Ballon d’Or, settling instead for the Italian Serie A ‘Player of the Year’ award.

Lazio are third — seven points behind Inter — and are unbeaten in the Stadio Olimpico this season, second only to Juventus for points accumulated on their home turf.

Roma are a further two points behind their city rivals and equal on points with fourth-placed Cagliari, who travel to Sassuolo on Saturday.

“They are a top side, first in the league, and very physical,” said Roma midfielder Jordan Veretout.

“Lautaro Martinez and (Romelu) Lukaku are difficult for any defence to contain, so we’ll need to put in a top performance to get a positive result.”

Lazio coach Simone Inzaghi warned that his side are gaining momentum and, powered by Serie A top scorer Ciro Immobile, the club have scored 21 goals at home in seven games.

“We’ll give everything against Juve,” said Inzahgi, whose side have lost just twice in the league this season, and not since September 25 against Inter in the San Siro.

Roma, a further two points behind, have also lost just two games this season, as they push for a return to the Champions League.

Beleaguered Napoli, meanwhile, head north-east to Udinese looking for a boost after eight games without a win, before their bid to seal a Champions League last 16 berth at home against Genk next week.

Coach Carlo Ancelotti ordered his players into a training camp after their 2-1 home defeat to Bologna last Sunday, risking further unrest at the troubled club.

Ancelotti’s side are seventh, 17 points behind Inter Milan, and the 60-year-old has decided to crack down on his players, who have reportedly also been fined 2.5 million euros ($2.7 million) in total by the club’s management for failing to respect a previous training lockdown.

Atalanta, in sixth, host Verona, three places below them, before their key Champions League game at Shakhtar Donetsk in the Ukraine.

Lautaro Martinez has scored 13 goals for Inter Milan this season in all competitions, spearheading the club’s forward line along with former Manchester United forward Romelu Lukaku.

“We were not surprised by his explosion,” said Inter vice-president Javier Zanetti of his fellow Argentine, who arrived from Racing Club last January.

“When we chose him we were convinced that he could demonstrate the value he is now showing.”

17 – Ciro Immobile’s Serie A goals for Lazio this season

8 – Napoli’s games this season without a win