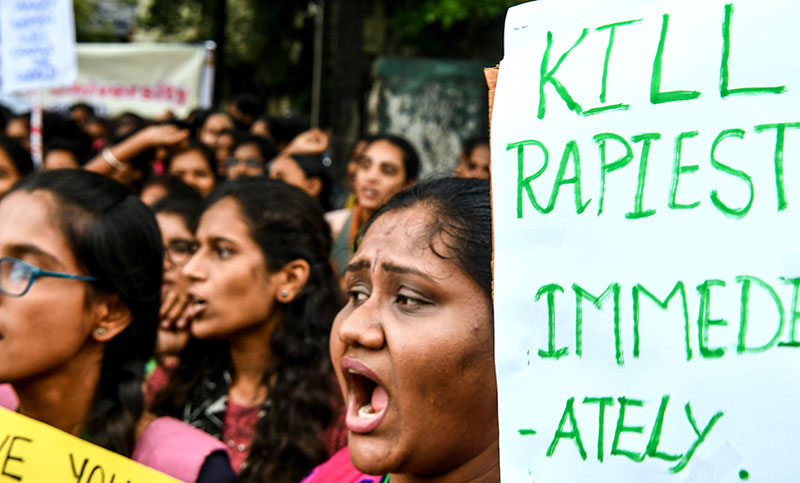 In a rerun of last week’s gang rape and murder of a veterinarian in Hyderabad, a woman was found shot dead and partially burnt after she was allegedly raped in Buxar district early on Tuesday.

Police said the woman in her early 20s could not be identified as her face was charred beyond recognition. The incident came to light after locals found her lying dead on a farmland on the outskirts of Kukudha village, which fals under Itadhi police station. Dr B N Choubey, the medical officer at Buxar sadar hospital who conducted the postmortem, said, “The private parts of the woman had severe burn injuries and swabs could not be taken. There is evidence to suggest that the victim was gang-raped before being killed.

The woman appeared to be around 20-22 years of age. The nature of her head injuries suggests that she was shot at point-blank range. Her face is burnt beyond recognition.” The doctor said she was wearing socks and sandals and had her nails polished. “Her medical reports confirmed that she was not pregnant. She appeared to be either unmarried or newlywed,” he said.

Buxar SP Upendra Nath Verma said a spent cartridge was found at the place where she was lying dead. “Her killers set her afire to destroy evidence,” he said. The SHOs of neighbouring police stations in Rohtas district have also been asked to assist.

Verma said all police stations in Buxar and its adjoining districts have been asked to verify the list of girls or women who have been reported missing by their relatives. DSP (Buxar) Satish Kumar said the murderers used straw to burn her body. “Forensic experts have collected clues from the spot. We are trying to find out whether the woman was killed there or murdered elsewhere,” he said.

When contacted, ADGP (headquarters) Jitendra Kumar said a forensic team had been sent from the police headquarters to Buxar to collect evidences from the spot. “Scientific investigation will be carried out in the case to nail the real culprits,” he told this newspaper. Buxar DM Raghvendra Singh said it would be early to jump on to any conclusion till the postmortem report is received. Opposition RJD lambasted the state government over the rising crime in Bihar. RJD MLA from Maner Bhai Birendra said there is no rule of law worth its name in the state. “Criminals are on the prowl and strike any time and anywhere while CM Nitish Kumar is virtually on his ‘chunavi yatra’ (election tour) under the garb of ‘Jal-Jivan-Haryali campaign’. People have been left to fend for themselves,” he said.