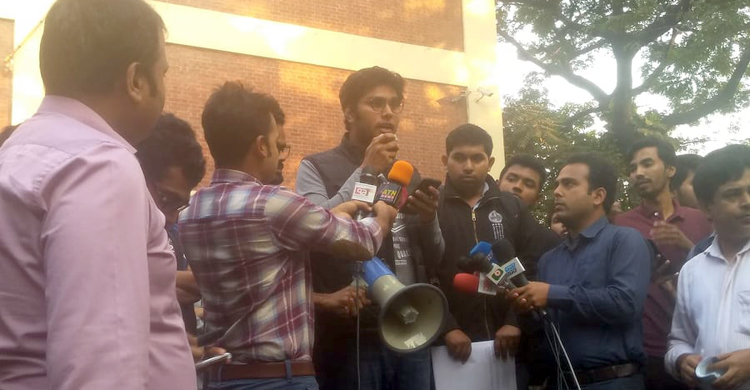 Students of Bangladesh University of Engineering and Technology (Buet) have called off their protests on the campus after realising major demands over the gruesome murder of their fellow Abrar Fahad.

The protesters made the announcement at a press conference in front of Buet Shaheed Minar in the capital around 4:00pm on Wednesday.

They also announced that they will participate in the examinations beginning on December 28.

“We thank the Buet administration for fulfilling our three-point demands. We announce the end of the agitation. We hope the university administration will compensate the Abrar family,” said a protester, Mahmudur Rahman Sayem.

“We want the judicial process of the murder case completed fairly and quickly. People like us all over the country are looking at this trial,” he added.

The academic activities of the engineering university were suspended since the Abrar killing by a group of BCL men.

The protesters earlier announced at a press conference that they will sit for exams if all of their three-point demands are fulfilled.

The demands include expulsion of Abrar killers, action against those involved in ragging in Ahsanullah, Titumir and Suhrawardy halls.

Abrar, a second-year student of EEE department, was brutally beaten to death by some BCL men at Sher-e-Bangla Hall on October 7.