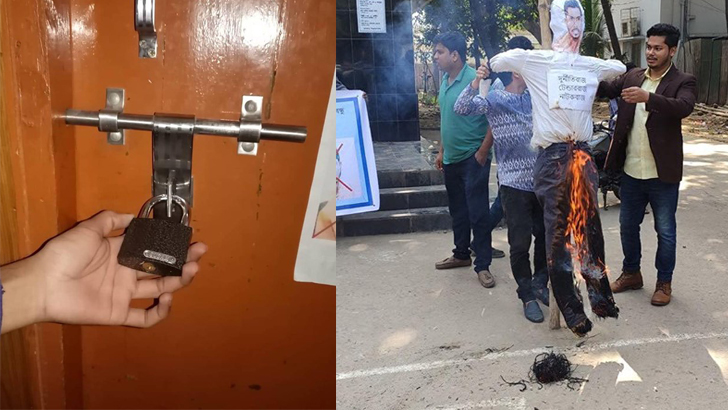 Members of Muktijoddha Mancha, a platform comprising descendants of freedom fighters, padlocked the room Vice President of Dhaka University Central Students' Union (DUCSU) Nurul Haque Nur and burnt his in effigy on campus on Wednesday after a telephone conversation of the quota reform leader with an expatriate Bangladeshi over the monetary contract was leaked on a private channel on Tuesday.

The demonstrators also demanded resignation of Nur from the post of VP immediately.

Earlier, the protesters formed a human chin on Dhaka University campus and gave a 48- hour ultimatum to the university administration to suspend Nur from the VP post.

Earlier on Tuesday, Nurul Haque Nur’s telephone conversation with an expatriate Bangladeshi over the monetary contract was leaked on a private channel. In this leaked audio clip, the expatriate asked VP Nur to send the bank account number along with the e-mail address.

Regarding the audio clip, VP Nurul Haque Nur recognized that this audio voice is of himself but he claimed that the private television channel has aired his audio partly aiming to create a negative image on his fame. He also mentioned that he will send a legal notice to the channel immediately. On Facebook live, Nur also criticized yellow journalism in this regard.