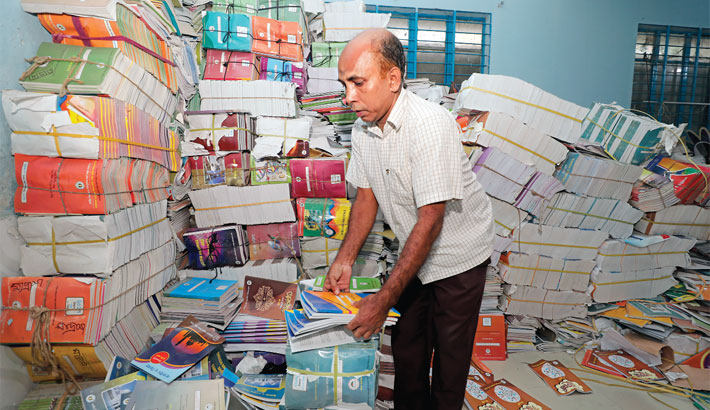 The National Curriculum and Textbook Board (NCTB) was ready to distribute the free textbooks on the first day of the New Year by organising book festivals across the country so that the students can begin their classes smoothly.

NCTB officials said they have completed all the tasks including printing and sending the new textbooks to every upazilas across the country ahead of the book festival on January 1.

The new textbooks have already been sent to the upazilas and the authorities of respective educational institutes are collecting the books to distribute among their students on the first day of the New Year.

Sources said the government distributed 296,07,89,172 textbooks free of cost among the students in pre-primary, primary, Ebtedayee, Secondary, Dakhil, Dakhil (Vocational), and SSC (Vocational) level across the country from 2010 to 2019 through festivals on January 1 every year.

Educationists said Bangladesh has set a rare example in the world through distribution of free textbooks among a large number of students on the first day of January every year.

The country has achieved impressive progress in education sector as the government has implemented various formative programmes including distribution of free textbooks.

Students are encouraged to continue their studies as they get free textbooks on the first of New Year, they said, adding the government deserves special appreciation for taking such a huge initiative (distribution of free textbook) for all students from primary to secondary levels.

Talking to daily sun, NCTB Chairman Prof Narayan Chandra Saha said: “We have sent the textbooks cent percent to the upazilas including the remote areas of the country and now the educational institutions are collecting the textbooks.”

“This year, all the textbooks were printed by the local printing presses and the quality of the books also improved compared to that in the previous years,” he said.

He said: “The distribution of such a large number of free textbooks among the students is a huge task for the authorities concerned. This successful distribution of textbooks through festival every year is being possible because of concerted efforts by all officials and employees concerned.”

NCTB chief urged the students and their guardian to collect the textbooks from their educational institutions free of cost and there is no need to buy any books from the market.