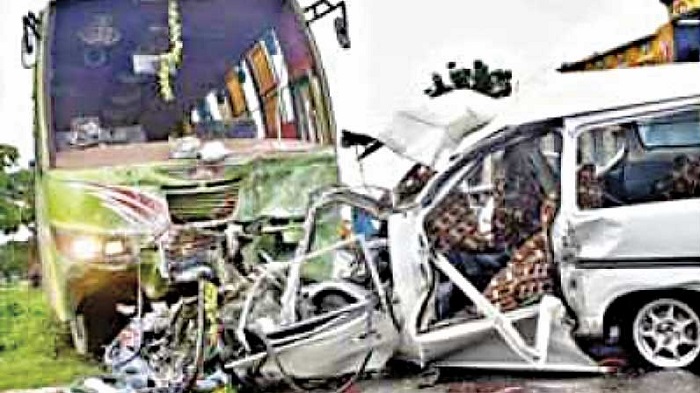 Eleven people, including a mother and her daughter, were killed in road accidents in eight districts on Tuesday.

According to reports reaching the media, two people -- Rehena Khatun, 31, and her daughter Anika -- were killed as a truck hit their three-wheeler from behind at Chakripara intersection in Sadar upazila of Joypurhat district in the morning.

Shahriar Khan, officer-in-charge of Sadar Police Station, said the accident took place around 9:30am when the mother was on the way to a local school to drop her daughter.

In Mymensingh, two people, including an assistant sub-inspector of police, were killed as a Dhaka-bound private car plunged into a roadside pond in Trishal upazila, said Trishal OC Azizur Rahman.

The deceased were identified as Aminul Islam, 32, the ASI, and his brother-in-law Jahidul Islam, 27.

In Bagerhat, a minor boy – Bayezid Sheikh, 6, son of Badshah Sheikh -- was killed by a bus at Gabtala in Kachua upazila in the morning.

Kachua Police Station Officer-In-Charge Sheikh Shafiqur Rahman said Bayezid was crushed under the wheels of the passenger bus when he along with his mother was returning home from his maternal grandfather’s home.

In Jhenaidah, a man, Nurali Hossain, son of late Olim Uddin of Krishna Nagar village, was killed in a road accident at Bada Para Bridge in Shailkupa upazila in the morning.

Shailkupa Police Station OC Bazlur Rahman said Nurail was crushed under wheels of the truck when he was going to the upazila town.

In Satkhira, a sexagenarian, Shafiqul Islam, son of Umar Ali of Ghalghalia Rahimpur village, was killed after being hit by a three-wheeler at Sakhipur in Debhata Upazila at noon.

In Barishal, a former army man, Tajul Islam Swapan, 52, a resident of Banaripara Upazila, was killed as his motorcycle collided head-on with a three-wheeler at Gabtala in Sadar Upazila, said local traffic sergeant Md Asad.

In Cumilla, a motorcyclist, Rakib Hauladar, 32, son of Badshah Hauladar of Jhalkati, was killed after being hit by a truck in front of Mainamati Highway Police Station at noon.

In a separate accident, another man, Abul Kalam, 87, was crushed to death under the wheels of a speeding bus in Chauddagram Upazila, said assistant sub-inspector Jasim.