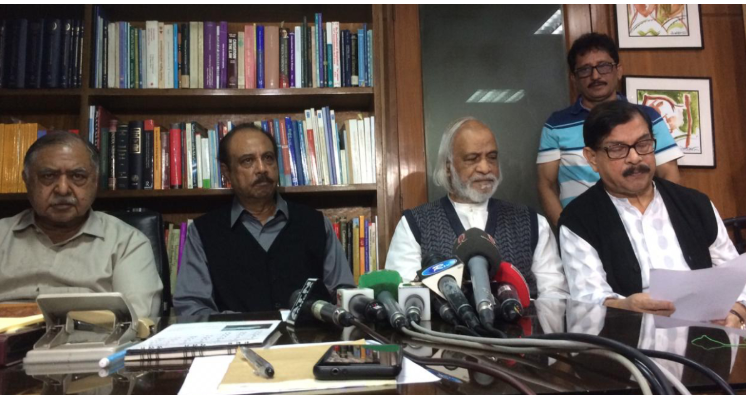 Jatiya Oikyafront Convener Dr Kamal Hossain on Tuesday said BNP Chairperson Khaleda Zia is eligible to get bail from the apex court in the corruption cases she was convicted.

“I would like to say she of course has the scope to obtain bail from the Appellate Division... what else should I say clearly about it,” he said.

Dr Kama, also a legal expert, came up with the remarks while talking to reporters after a meeting of Oikyafront’s Steering Committee at his Motijheel chamber.

He said the meeting demanded Khaleda’s release on humanitarian grounds.

The meeting discussed the health condition of the BNP chairperson and three-time former Prime Minister and expressed concern.

Reading out a written statement, Nagorik Oikya Convener Mahmudur Rahman Manna said, “We know Khaleda has been kept in jail for 664 days with a motive.”

Stating that the BNP chief has been convicted in ‘motivated’ cases, he said considering her latest health condition, they demanded her immediate release. “It’s our meeting’s main demand. We think it’s a human demand and she deserves to get bail.”

The alliance also warned the government that it will be held responsible for the emerging situation in the country if Khaleda is not given bail, and if she is subjected to injustice.