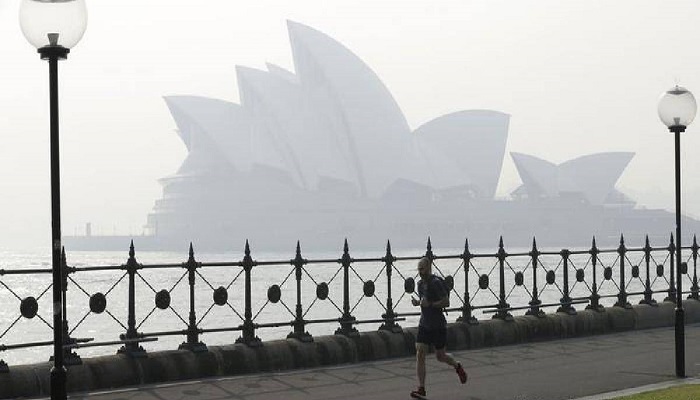 The Australian city of Sydney was once again blanketed in dense smoke on Tuesday as nearby bushfires filled the air with hazardous smog, prompting locals to wonder when they will see the sky again.

Over the past month Sydney has come to resemble one of the world's most polluted cities rather than the blue-skied coastal haven it is internationally known to be.

So far in November and December of this year alone, the city has experienced more hazardous air quality readings than in the past five fire seasons combined.

"We're experiencing much higher levels (of particle matter) than what we normally have in Sydney and really lots of part of New South Wales State (NSW)," Christine Cowie, senior fellow at the Center for Air Pollution, Energy and Health Research at the University of New South Wales told Xinhua.

On Tuesday it was two large fires in the Blue Mountains west of Sydney which blocked out the sky, deteriorating air quality as the smoke drifted east and settled over the harbor city.

Health authorities warned vulnerable people, such as those with pre-existing respiratory conditions, young people and the elderly, to avoid being outdoors where possible.

However Cowie said that exposure to high levels of particle matter in the air could have effects beyond those with respiratory issues.

"These fine particles can penetrate deeply into our lungs and they can also cross into the blood system and affect other organs in our body," Cowie said.

"There's really strong evidence for the effects on the cardiovascular system and those effects manifest themselves in an increased risk of heart attacks and stroke primarily."

Cowie emphasised that Sydney is experiencing relatively short periods of hazardous air quality, compared to a number of metropolises which experience the year-round effects of air pollution.

Unaccustomed to the poor air conditions, some Sydneysiders took to fashioning facemasks out of scarves and other items of clothing, while schools cancelled outdoor sporting events to avoid any unnecessary risk.

As of midday on Tuesday there were 116 bush and grass fires burning across NSW - 56 of which were not contained - and over 2,000 fire-fighting personnel were working in the field with the help of support aircraft.

So far the fires have claimed the lives of six people this season and destroyed roughly 670 homes and 1,400 structures.

Sydney's smoky conditions are expected to persist at least until the end of the week when onshore winds may develop to help clear the air, particularly near the coast.