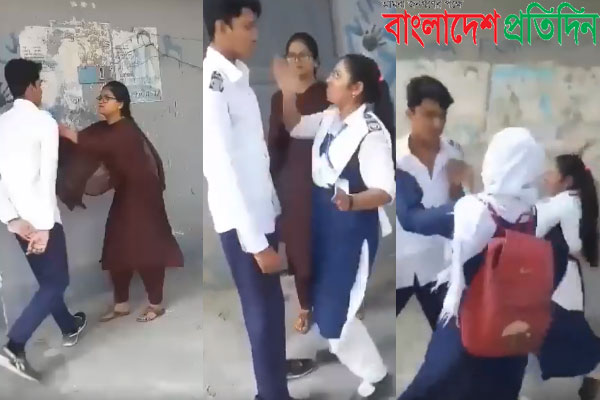 The incident took place in front of the entrance gate of the college on Thursday afternoon.

Later, a video of the incident went viral on social media platforms including Facebook at the same night.

In 25-second video, three female students of the college were spotted slapping the alleged stalker.

All of them are students of class-XII of the colleges.

On information, the test examinations of the humanities group were held on Thursday. After the exams, the accused student gave an indecent proposal to the victim in front of the college. At one stage, he tried to touch her inappropriately.

The victim quickly left the spot and informed her female classmates of the college.

They rushed to the spot and demanded an explanation from the accused over his misdeed. At one stage, they slapped and punched him protesting the harassment of their mate.

Principal of the college SM Jersis said, “I have talked to the students over the incident after watching the video. I have primarily known that the accused student has harassed one of his female classmates.”

“If anyone is involved in such wrongdoing, we will take stern action against him or her,” he said.

“We have called the guardians of the students to come to the college on Sunday. We will take punitive action after talking with the both groups,” the principal added.