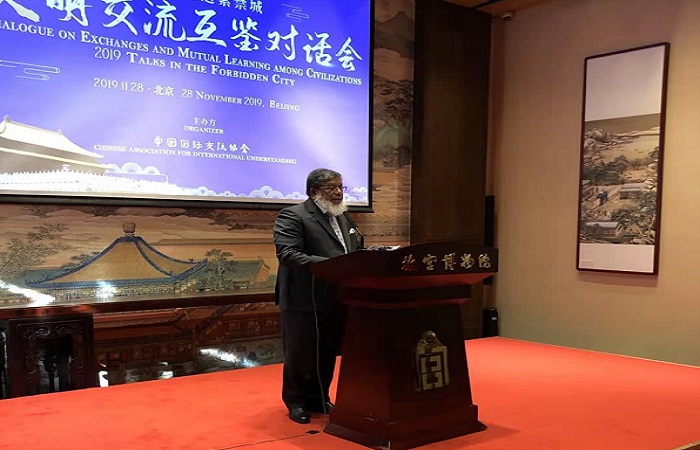 Deputy Speaker of Bangladesh Parliament Md Fazle Rabbi Miah MP on Thursday said Dhaka attaches high importance to its relations with Beijing. Because the foundation of this relationship was laid by the visit of Father of the Nation Bangabandhu Sheikh Mujibur Rahman to China in 1952 and 1957, he said.

The deputy speaker was delivering a speech at an international conference titled 'Dialogue on Exchanges and Mutual Learning among Civilisation' in Beijing.

Bangladesh Ambassador to China Mahabub Uz Zaman was also present at the opening ceremony of the event.

In his speech, Fazle Rabbi recalled that forty years ago, Bangabandhu in his maiden speech at the UN General Assembly said, “The Bangalee nation is pledge-bound to establish a global order based on peaceful co-existence, social justice and freedom from poverty, hunger, exploitation and aggression.”

Now under the farsighted leadership of Prime Minister Sheikh Hasina, daughter of Bangabandhu, Bangladesh is striving to achieve its ‘Vision 2021’ to become a developed country by 2041, he continued. "We are going to nationally celebrate the Birth-centennial of our Father of the Nation Bangabandhu Sheikh Mujibur Rahman in 2020," he added.

"If you dip into history you will know that Bangabandhu is the name of an indomitable spirit without whom we can’t even think of Bangladesh as an independent country," he further added.

The deputy speaker also called upon Chinese and other friends from around the world to visit Bangladesh during the auspicious year of 2020.

Appreciating China's Belt and Road Initiative, he said it will enhance the alignment of the development strategies and fully tap the potentials of cooperation in various regions to pursue common development and prosperity.

"To meet our common challenges and create a better future for all, we look to culture and civilization to play their role, which is as important as the role played by the economy, science and technology," he added.

The deputy speaker is now leading a delegation of Bangladesh Parliament on a five-day tour to China.