‘Let me go back to classroom,’ appeals a DU teacher 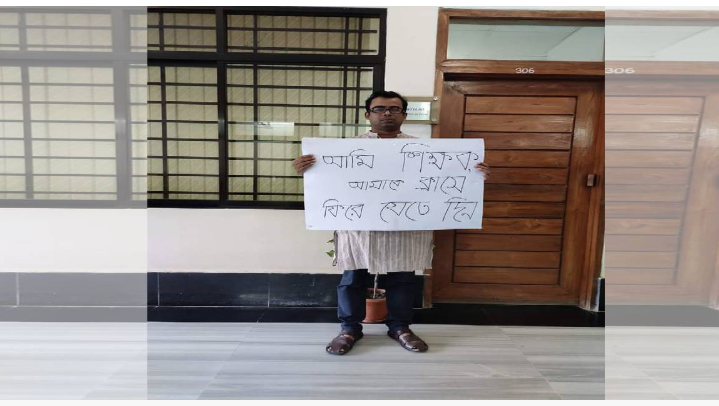 A teacher of Dhaka University’s Economics Department staged a sit-in on Thursday in front of the department chairman’s room demanding the authorities concerned to allow him to go back to classroom.

Rushad Faridi, an assistant professor of the department, was holding a placard inscribing, “I’m a teacher, let me go back to classroom”, has gone viral on social media.

Faridi was sent on forced leave on July 13, 2017 following a syndicate meeting without issuing any show cause notice after a number of teachers of the department brought some allegations against Rushad and refused to work with him.

Rushad Faridi told UNB that he was sent on forced leave over ‘baseless and false’ allegations without any prior notice.

"After the High Court order, I’ve sent an application to join the department. But the department refused to receive my application and told me that they’ve nothing to do unless there’s any permission from the higher authorities of the university" he said.

the authorities are ye to contact me. Actually, I always raised my voice against any irregularity in the department and that’s how I became a target," he added.

Rushad also vowed to continue his protest every day until the authorities allow him to go back to the classroom.

On July 24, 2017, the High Court questioned the legality of the syndicate’s decision to send Rushad Faridi on forced leave.

The court then issued a rule asking the authorities concerned of the Dhaka University to explain in two weeks why the syndicate’s decision to send Faridi on forced leave should not be declared illegal.

After two years on August 25 this year, the High Court declared the syndicate’s decision illegal and ordered the DU authorities to allow Faridi to join his office.

The HC declared the verdict following a writ petition filed by Faridi.

Talking to reporters on Thursday, Chairman of the Economics department Prof Shafiqueuz Zaman said they had nothing to do with this matter as there was a legal dispute between the university and Rushad Faridi.

He said the university authorities will decide his fate and they will just follow their decision.

Despite repeated attempts, DU Vice Chancellor Prof Dr Md Akhtaruzzaman could not be contacted as he did not receive the phone calls.