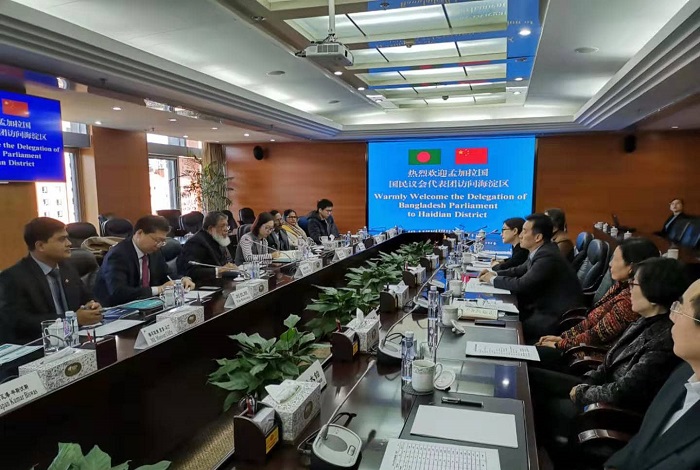 Deputy Speaker of Bangladesh Parliament Md Fazle Rabbi Miah MP called upon Chinese entrepreneurs and businesses to invest more in Bangladesh. He made the call while meeting with Chairman of Standing Committee of Haidian District People's Congress of Beijing Liu Changli on Wednesday.

The deputy speaker is now leading a delegation of Bangladesh Parliament on a five-day tour to China. During the meeting, Fazle Rabbi was accompanied by Abdul Mannan MP, and commercial counsellor of the Bangladesh Embassy in Beijing Md Monsour Uddin.

Citing that Bangladesh has perfect environment for foreign investments, The visiting deputy speaker said Chinese investors are most welcome to different vibrant economic sectors of Bangladesh. He recalled outstanding contributions of Father of the Nation Bangabandhu Sheikh Mujibur Rahman in nation building after the independence of Bangladesh.

The Father of the Nation undertook different effective measures to prosper the war-ravaged country, he continued. But the military junta usurped state the power and hindered the progress of Bangladesh through killing Bangabandhu and his family members in 1975, he maintained.

Fazle Rabbi said that implementation of some China-funded mega projects are going on in full swing in Bangladesh. If such cooperation between Bangladesh and China continues, Bangladesh has prospects for becoming a developed country in a short span of time, he maintained. Mentioning that friendship to all and malice to none is the foreign policy of Bangladesh, the deputy speaker said Dhaka maintains good relationship with all its neighbours including Beijing.

Mutual cooperation and stronger relationship between Bangladesh and China will quicken the development of the two countries, he noted.