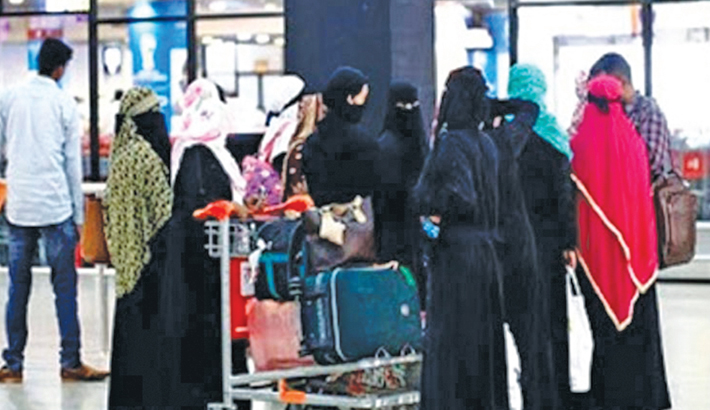 The debate stands not on female workers’ (FWs) migration itself in principle, rather on the process and difficulties faced afterwards, particularly in the Middle East (ME), being abused and harassed, also upon returning home, inability to reintegrate in the society. Data suggested, in 2016, the number of total labour migrants from Bangladesh was 11.5 million, of which 752,771 were women (one of 15 immigrants) who sent an amount of remittance that made up seven per cent of GDP in the mentioned year (BRAC). Therefore, it is not an overstatement to assert that female remitters can be likened to golden-egg-laying-ducks, and the government has little reason to restrict their migration leaving them unemployed.

Bangladeshi FWs have not remained the first choice in ME, which needs 1.6 million female domestic-helps, and the Kingdom of Saudi Arabia (KSA) requires the most. Previously, the Philippines, Indonesia and Sri Lanka were the top-ranking FWs exporting countries in the area. However, in 2015, in the face of abuse of FWs, they stopped or limited FWs’ migration to KSA. This turnback of traditional sources opens an opportunity for Bangladesh particularly for sending FWs after a virtual closure of all forms of migration from 2009 until 2014.

However, sending of FWs was not new, it began in 2000, and since then the curve has displayed a soaring trend, though the major thrust was observed in 2017 with the migration of 83,000 FWs when the figure of them quadrupled in two years after an agreement between GoB and the Kingdom in 2015. According to Bureau of Manpower, Employment and Training, during the period of January 2015 to September 2019, a total of 293,588 FWs migrated to the Kingdom, and they constituted 80 per cent of total FWs.

In Bangladesh, private agents have remained pivotal in overseas employment and remittance generation from emerging markets for decades. However, due to their high profit making primary intention and opacity in operation, fades their contributions to some extent. Unsurprisingly, their numbers rise from 20/30 to around 1,221 in few years for high profitability. Now, they become aggressive in sending FWs due to their opportunity of sending two men against each woman. They displayed negligence in fulfilling government’s provisions of month-long training and age bar for FWs, as they send women of under or overage with falsified information in documents and incomplete or unsuccessful training. These agencies and their associates in migrants receiving countries consider their job completed after boarding FWs in aircraft; these agents only have notion of steering FWs for profit, rather than saving from them atrocities.

Who are these women accepting the challenges? Most of them come from remote areas and ill-fated families with illiteracy, marginalisation, extreme poverty, ordinary skills and no voice. They are easily allured by Dallas (brokers) for a salary of TK. 20,000 (TK17, 000 in real) and a comfortable life with a contract of two years without any or a small travel cost. Similarly, the dream of performing Hajj, visiting venerable cities and an unquestioning belief on the people wrench them from roots.

Lamentably, their dream of contented life declines after joining jobs in an unamicable environment, culture, and working condition. The outcomes suggest, though most of FWs (90 per cent) have adapted with the situations and sent money home regularly, yet the rest (10 per cent) suffered from life-threatening inhuman physical and mental trauma. Physically, they were mercilessly whipped, burned with hot iron, tangled with ropes, locked in bathroom, starved, etc., and mentally they were segregated from families by obstructing use of cell-phones, disturbed by low and irregular payment, restricted to move freely by sieging passports allowed by Kafala system, offered limited or no rest and recreation in a threatening environment, tried to be engaged almost 24/7 with heavy workloads, etc.

However, what surpasses all these tortures involved, is brutal rape/gang rape. These barbaric behaviours remind us about the thralldom, where slaves had no rights and masters could undertake any activity unrestrainedly with slaves’ private organs and lives. In a few instances, when FWs tried to impede masters in raping, they answered, “Don’t you recognise why you are over here; I have bought you.” That means employers have taken it for granted that FWs will serve anything they demand. Additionally, people in the ME use apps such as ‘Haraj’ and ‘For Sale’ particularly, and Facebook, Instagram and other social platforms generally to ‘sale’ women with a price varying from two to three thousand dollars, where submissive qualities, less demand for food and sleep, and good adaptability become indicators of high price.

These ordeals of FWs result in returning home with pregnancy, spots of burns, broken or damaged organs, mental disorders, transitory or permanent physical incapacities, and unacceptance by family and society. ‘Ovibashi Karmi Unnayan Program’ found in a study with 110 returnees that ‘86 per cent did not receive their full salaries, 61 per cent were physically abused, 24 per cent were deprived of food and 14 per cent were sexually abused.’

A report submitted to the related committee of the parliament by Ministry of Expatriates’ Welfare and Overseas Employment stated that amongst 111 returnees in August 2019, 38 experienced physical or sexual abuse. Foreign Ministry discloses that till 30 October 2019 they have offered protection to 1,206 in safe-home (the figure is 9,177 from 2015 to October 30, 2019) and amongst them 16 were Hamil (pregnant). Still, till October 2019, the traumatised 900 who returned alive are somehow fortunate, as 119 failed to do so as their dead-bodies arrived home [30 “committed suicide,” 19 of them in Saudi Arabia alone (BRAC)].

BRAC furthered that from 2016 to June 2019, 315 dead bodies of FWs arrived in Bangladesh of which majority was from the Kingdom, amongst them 53 committed suicide, 120 died from a stroke and another 56 died by accidents. These figures stand as evidence of the traumatic experiences, immense workload and inhuman ambience the FWs went through. Moreover, these deceased were so unfortunate that even after their unnatural death the focus of the families did not center on their sacrifice rather on how much they would receive as unpaid salaries and reparations.

Statistically, most of the FWs remain in good condition, but when it is a matter of humanity the number must not be the issue, every life and its trauma need to be addressed seriously. It is high time for the government, I/NGOs, and international agencies to come up with solutions to ensure an excellent environment for FWs. The government lately has held wrongdoers responsible for mistreating FWs and fined them tk 9,200 for each of 318 FWs, though low in numbers compared to victims, yet the process of punishing has started.

Finally, the government should consider the fact that whether they are creating fortunes for the FWs, or pushing them to live in a traumatic life. We strongly believe that the government might have been sending these FWs for their better future. But, it is also the responsibility of the government to guarantee their safety and security while they are staying abroad. In order to ensure this, the government should hold bilateral discussions with the receiving countries. Our diplomatic missions should also work with sincerity for ensuring security of FWs. Otherwise, we are only sending them to live a traumatic life in the name of bright future.

The authors have acknowledged all sources of information.