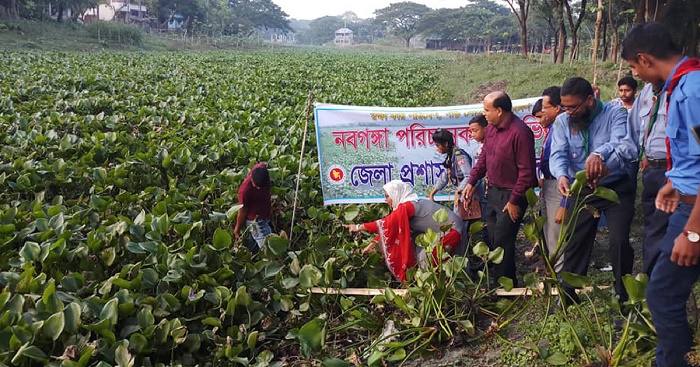 The frail Nabaganga River flowing through the district was barely recognisable only a few days back when it was covered with water hyacinths and other floating materials. Many had feared that the river would be

But the river is making a comeback thanks to the joint efforts of the sadar upazila administration, public representatives and locals.

Nabaganga had been losing its navigability over the years and heading towards a tragic end. It changed its course several times in the last century and today it merges with the Kumar River after flowing through Chuadanga and Jhenidah.

Jhenidah Sadar Upazila Nirbahi Officer (UNO) Shammi Islam told UNB that the administration contacted all union parishad chairmen to take an initiative to free the river from water hyacinths and breathe a new life into it.

They started their joint campaign in the first week of November.

UNO Shammi said they have cleared over a five-kilometre stretch of the river that flows through the town.

Locals said the residents of 30 to 35 villages will be benefited if the river gets back its navigability. This will also help local species of fish and biodiversity to thrive.

Abdus Sattar, president of Bhuiagati Fishermen Cooperative Society, thanked the upazila administration, and said steps should be taken on a large scale to bring the Nabaganga back to life in the district.

UNO Shammi told UNB that under the directive of Jhenidah Deputy Commissioner Saroj Kumar Nath, they took a work plan – ‘Save the Nabaganga’ – to clear water hyacinth from the Nabaganga, Begbati, and Bhairab rivers that flow through the district.