Mongla port: From a bane to boon 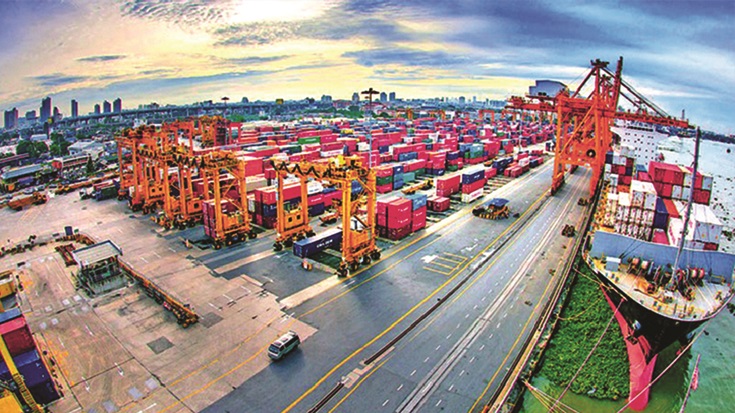 KHULNA: Once a sleeping port and burden for the country, the Mongla Port, is currently vibrating with activities aiming to increase its capacity four times in the next two years, a top official said.

Prime Minister Sheikh Hasina took a visionary step to revitalize the port which was shut down for incurring continuous loss after her Awami League came to power in 2009.

In an exclusive interview with the daily sun, Mongla Port Chairman Rear Admiral M Mozammel Haque praised the prime minister for decision to turn the sleeping and loss making port into an active one.

Terming the project big one, Rear Admiral Haque said Mongla port capacity would be increased by four times within the next two years. Around 500 acres of land of the port has been readied for the construction and extension of jetty, yard and bonded warehouse.

The port was set to celebrate its founding anniversary on December 1 with a commitment to boost capacity and service tremendously.

"We have also vowed to develop our own system to fight corruption. The importers, exporters and other stakeholders will experience the transparency of the port functions. We are seriously implementing e-tender and online scrutiny to this effect," the port chairman added with confidence.

Established in 1950, Mongla Port faced many struggles and setbacks due to political reasons and the past regimes gave no importance to this port, he added. He said the port was totally ignored and Chattogram Port was given all importance from 1971 to 2007, “This made Chottogram Port the focus of all cargo movements,” he said.

Mongla port was eventually shut down in 2007 as it was unable to pay wages to its officers and staffs.

After Awami League came to power, the port scenario started to change.

“The Awami League government reopened the shut Mongla Port. Prime Minister Sheikh Hasina had opined that the port has to play its own role and operate again as per its own capacity,” he said.

He said the government gave huge subsidy in terms of projects and allocation of money to be spent under the Annual Development Programme (ADP) for revitalizing Mongla Port.

A lot of works were done and many projects undertaken for improvement of the port since 2008, he said. The overall figure of last 10 years shows growing capacity of the port to handle ships, container, loose cargo and roro vessels.

Now, the port is capable to handle 1,000 ships per year which was zero before 2009. The number of ships coming to this port has tremendously increased in a decade. In last fiscal year (2018-19), 912 ships arrived.

About the growing number of ships coming to Mongla port, he said 60 ships came in August this year, 70 in September and 93 in October.

At this moment, the port is using only 50 percent of its capacity. Lack of navigability is one of the major reasons why the port is not getting that much container but dredging was underway. No government worked on the dredging in the past. But Awami League government has started to dredge the port.

The dept of water does not allow 9 meter ship to come to the port. The ships coming from Colombo and Singapore have to offload in Chattogram port before heading towards Mongla. This is why, the cost is double. Most of the businessmen and operators preferred Chattogram.

“We are working on dredging of the channel to allow 9 meter container ships. It will take one and half years to complete outer berth dredging.  It is very difficult area at sea. A Chinese and South Korean joint venture company is doing the job,” he said.

Speaking about inner berth dredging, he said a proposal of inner berth project worth Tk 850 crore is pending with decision of the Planning Commission. The project is likely to be approved at ECNEC meeting chaired by Prime Minister Sheikh Hasina by end of this year.

Inner berth covers 31km distance from herbaria to port area. Outer berth is from Hiron point to outer sea spreading over 25km. Currently, these two areas are causing problem requiring to be dredged.

“We are working to hike inflow and export of the container through this port. The problem will be resolved as huge dredging work has been initiated.”

Mongla port has the capacity to handle 1,00,00, 000 metric ton of loose cargo per year. Cargoes loaded with fertilizer, food, jute, machinery are coming to the port. But 70 percent of the loose cargoes are offloaded in outer anchorage, not the jetty. Charge of offloading in jetty is higher. However, transportation of cargoes from port to other parts of the country can take place smoothly.

Import of the car has been largely based on Mongla port now due to the government’s policy. Once upon a time, no roro vessel used to come to this port. But, the government has made a compulsion for Bangladesh Reconditioned Vehicles Importers and Dealers Association (BARVIDA) to import cars via this port. As such, most of the cars are being imported through this port which is cheaper.

“If you go to the yard, you will find it flooded with cars. The car has been coming through this port since 2009. This is another great achievement for this government,” he said.

Mongla port is getting the scope to handle imported items very well. Bangladesh’s overall economy is not export, but import oriented. Therefore, ports have limited scope to deal with export items.  But, 98 percent of the country’s main export item readymade garments are going abroad through Chattogram port. Mongla port channel is too narrow to handle RMG containers.

Besides, formulation of Master Plan for Mongla Port has been initiated. There is no such plan yet. “By next one year we are going to have a beautiful master plan. A German company is entrusted with making the plan in line with the government’s Delta Plan for 2100,” he said.

Designs for building, jetty and river and manpower requirement will also be enumerated in the plan. After getting plan in hand, we will send it to the ministry for approval and develop the port accordingly.”

Meanwhile, we are working for the port development. The port which started its journey with five jetties decades ago is still dependent on those.

“Dilapidated five jetties and six sheds with limited capacity are our only assets. Handling of the ships with old five jetties with the crane facilities is really a tough job.”

Another major project, titled Mongla Port Upgradation Project, has been taken to boost the port capacity.  Estimated cost of the project is Tk 6,000 crore. The proposal of the project is now pending with ECNEC approval. The plan is likely to be approved within this year.

The projects will be implemented under 12 components. Construction and renovation of jetty, car yard, container yard,  handling equipment yard, six kilometer road, office building, residential building for staffs and officers, workshop and procurement of equipment will take place under the project.

Besides, Mongla port authorities have issued notification inviting private companies and individuals to invest in it. As per the government policy, 30 percent works of any sector should be done under Public Private Partnership (PPP) project. A wing under the Prime Minister’s Office (PMO) is designated to deal with PPP. A private company is already investing Tk 450 crore for constructing two jetties which will be completed by 2020. “We are going to get two jetties under PPP and two jetties under Mongla upgradation project taking a total of four with all equipment facilities by next two years.”

Implementation of G- to- G project of Bangladesh and China is going in full swing to construct another two jetties very soon, he added.

“So, we are going to get 11 jetties including old five and new six within next two years for efficient port operation.”

“We are implementing a project called vessel traffic monitoring and information system (VTMIS). Four towers with radars will be constructed to monitor 131km area from Hiron Point to port. Infrared camera (IR), radio equipment, digital equipment, and other automated system will be inducted. Not only movement of ship but also of individual will be under watching of port control room. This project will be complete by June next year,” he said.

The major crisis of the port is the fresh water as Khulna is saline prone area. Now, water is being collected from underground system in an area which is 25km away. It is not environmentally sound. So, a private company is assigned to construct treatment plant where surface water will be purified for drinking and other purposes. Within the next year, the project will be fully implemented.

“We are going to phase out old ship to be replaced by new ones. At least 14 ships will either be imported or be constructed locally within next two years. Those will include tugboat, survey boat, pilot boat, bowling boat and water barge. The project is pending with decision of the Planning Commission.”

To handle all the future expansion, new staffs and officers are being recruited, he said. Besides, oil spill management system vessel will be procured to combat oil spill contamination of the water of Sundarbans area, if happens in future. The project is also pending with Planning Commission and expected to be passed by December this year.

If this vessel is procured and other projects are implemented, Mongla port will be more environment-friendly. It will be better than Chattogram which does not have strong oil spill management system, he said.

“A comprehensive plan for developing management of garbage, solid waste and liquid waste are going to be installed. It will be a total composite package is coming very soon. It is not even available in Chattogram port,”  he opined.

Present state of the Mongla Port is improving very good as it has made profits in last financial years. Awami League government has succeeded in turning Mongla port from a losing concern to profitable one.

The Mongla port paid source tax Tk 430 crore in 2018-19 FY. Mongla Port Chairman said he submitted income tax Tk 33 crore to Khulna tax commissioner on November 19 this year. In the next FY, the port has higher target. So, this port is no more a losing concern.

"I am grateful to Prime Minister Sheikh Hasina for taking pragmatic steps and policy guidelines through the Shipping Ministry to revitalize Mongla Port. The ministers, secretaries and officials concerned have taken right decisions to upgrade this port. Without support of the Prime Minister, Mongla port did not have capacity to turn around."

The port has given 1,000 acres of land to big companies for industrial projects. Now, it is looking forward to getting private investment. Cement, LPG and other industries are running in the port area. Constructions of highway, railway and other projects are being initiated to establish strong connectivity with the port for shipment of cargoes and goods to and from various parts of the country.

After construction of the Padma Bridge is over, Mongla port will be able to send covered vans and cargoes to the capital Dhaka directly. Distance between capital city and Mongla port is shorter than that of Dhaka and Chattogram. So, use of Mongla port will be overwhelming in the coming days. This port will also be used for regional purposes. Bangladesh and other regional states are likely to take collective steps to boost capacity of the port, he hoped.