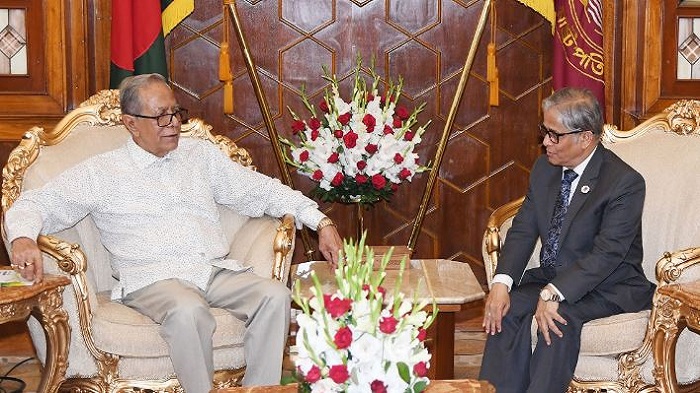 President Abdul Hamid on Sunday asked the Dhaka University (DU) authorities to take necessary steps to ensure a fair and academic-friendly environment on the campus.

The President said this when DU Vice-Chancellor Prof Dr Md Akhtaruzzaman called on him at Bangabhaban this afternoon.

Prof Akhtaruzzaman apprised the President of overall activities, including the development plans, of the university.

"Take necessary steps to ensure a fair and academic-friendly environment on the campus apart from the regular academic activities,” Joynal quoted the President as telling the VC.

Noting that DU is Bangladesh’s highest seat of learning with academic excellence, Abdul Hamid directed the university authorities to give special emphasis on its environmental issues.

He also stressed the need for taking an integrated initiative to build students as worthy citizens, engaging them in various social, cultural and science-based activities.

“Besides, the President was informed about Dhaka University’s preparations for celebrating the birth centenary of Father of the Nation Bangabandhu Sheikh Mujibur Rahman,” the Press Secretary said.

The VC also informed the President about the preparation of holding the upcoming 52nd convocation, where some 20,800 graduates will be conferred degrees.

President Hamid was also told about arrangement of an international seminar scheduled to be held on the university campus next year.

Over 100 scientists from home and abroad are expected to take part in the seminar titled “Climate Change and Food Security”.

Earlier, a delegation of physicians led by Prof Dr Arup Raton Choudhury, founder president of the Association For the Prevention of Drug Abuse (MANAS), paid a courtesy call on the President at Bangabhaban.

Secretaries concerned to the President were present.