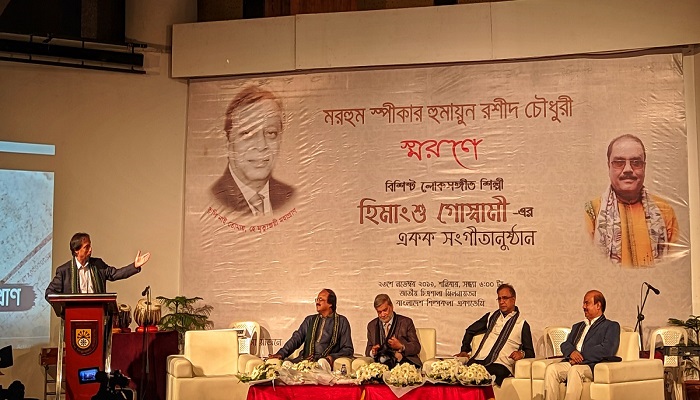 Planning minister MA Mannan said during an event at Bangladesh Shilpakala Academy (BSA) on Saturday that "The daughters of Bangabandhu became utterly helpless abroad when the great leader was killed, as the aftermath of 15 August was scary- and Humayun Rasheed Chowdhury, country’s renowned and respected diplomat, was the first one to protect them with care. He sheltered and saved Bangabandhu’s daughters, and Bangladesh is incredibly grateful to the late speaker of the parliament.”

The minister, also the chief guest of the evening, spoke highly about the late Speaker of the Parliament at the event, which was a solo musical tribute by renowned folk singer Himangshu Goswami to the great diplomat and one of the most eminent personalities of Sylhet, Humayun Rasheed Chowdhury.

KM Khalid paid his respect to the late Speaker of the Parliament, saying “Prime Minister Sheikh Hasina often expresses her deepest gratitude to Humayun Rasheed Chowdhury. He was the one who protected Sheikh Hasina and Sheikh Rehana, the daughters of Bangabandhu after the brutal 15th August- and PM never forgot that favour. He was a dear one not only to Sylhet, but to the whole country who also glorified Bangladesh to the rest of the world.”

Hosted by Speaker Humayun Rasheed Smriti Parishad’s Chairman and Principal Secretary to the Prime Minister Md Nojibur Rahman, the event also featured a solo discussion speech by Public Service Commission (PSC)’s Chairman Dr Muhammed Sadique who said “we are here to celebrate our own culture, our own heritage which got recognition from UNESCO - and this type of cultural activities became possible thanks to the smart and iconic personalities such as the great diplomat and late Speaker of the Parliament, Humayun Rasheed Chowdhury.”

Singer Himangshu Goswami, who has a musical legacy spanning over 40 years of involvement with Bengali Folk and Devotional music, expressed his emotion regarding the special event saying “I came here from London to perform in this tribute musical night to Humayun Rasheed Chowdhury, who was a cultural mind with living colours. I still remember playing the tabla at a musical programme arranged by him in the Pakistan era when Tagore songs were banned- which prove how brave he was for his culture, music and country.”

“Sylhet is a land of musical beauty with tremendous cultural heritage, where Humayun was born- and I am really proud and happy to tribute the eminent diplomat through my tones and tunes of Sylhet,” singer Himangshu Goswami continued.

Later the singer performed folk and tribute songs in the solo musical night, with renowned musicians of the country.