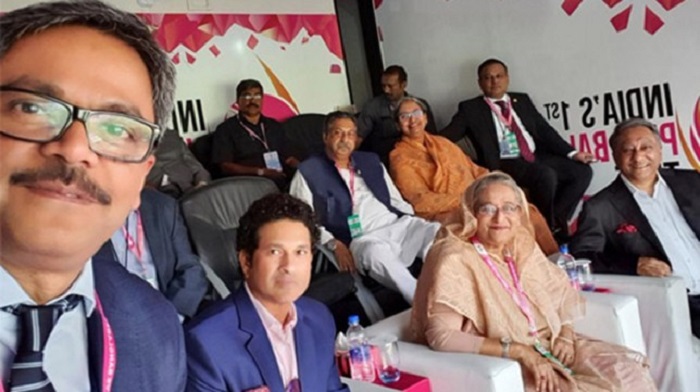 Mayor of Kolkata and Minister for Urban Development and Municipal Affairs of West Bengal Firhad Hakim and Bangladesh High Commissioner to India Syed Muazzem Ali saw the premier off at the airport.

The flight is scheduled to land at Hazrat Shahjalal International Airport in Dhaka around 12:30 (BST) tonight.

During her stay in Kolkata, the premier witnessed the first day of the second cricket Test of the two-match Test series between Bangladesh and India that began at Eden Gardens at 1:00 pm local time.

Earlier, Sheikh Hasina along with West Bengal Chief Minister Mamata Banerjee rang the ceremonial bell for the opening of the Test match between Bangladesh and India at the Eden Gardens around 12:55 pm local time.

On the sidelines of the match, West Bengal Chief Minister Mamata Banerjee paid a courtesy call on Prime Minister Sheikh Hasina at Taj Bengal, Kolkata, where she stayed during her short visit.

Indian Premier Narendra Modi formally invited Prime Minister Sheikh Hasina to attend the historic day-night Test match in the West Bengal capital of Kolkata, popularly known as ‘City of Joy’ from November 22 to 26 witnessed the first session of the second Test match at the stadium.

After watching the first session, the prime minister returned to her place of residence.

She again went to the stadium in the evening.

After the first day’s match, she joined a short cultural function that followed by a felicitation programme arranged by the Cricket Association of Bengal at the ground of the Eden Gardens Stadium.

Earlier, President of Board of Control for Cricket in India (BCCI) Sourav Ganguly invited Prime Minister Sheikh Hasina and her Indian counterpart Narendra Modi to watch the second Test match in Kolkata.