Anirban Library: A ray of light in a remote village 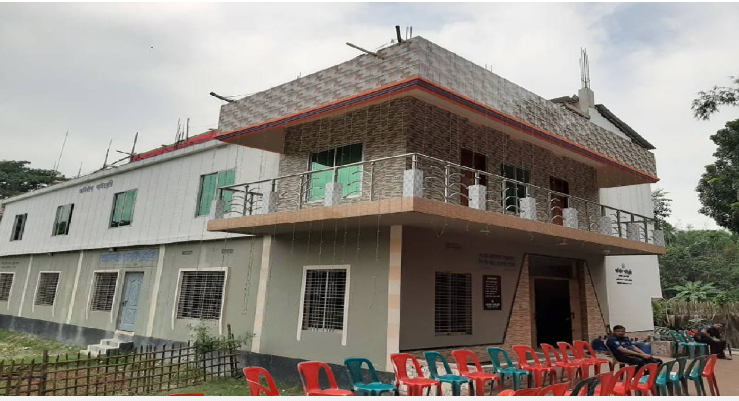 In a remote village under Paikgacha upazila, there is a library unlike any other. This library has become a beacon of knowledge for locals where boys and girls can read, learn dancing, acting, debating, music, reciting poems, computer skills and even take private tuitions absolutely free.

More importantly, students and guardians are made aware of social issues like child marriage, eve-teasing, drug abuse and terrorism in this library located at Maumudkati village in Haridhali union.

Talking to the UNB correspondent, Brishti Ghosh, Rupom Bhodro, Tonni Mondol and several others, said people in their locality could not afford education without Anirban Library.

The residents of this village are extremely poor but many boys and girls in the area have got the opportunity to study outside, thanks to the library.

There was a time when the literacy rate in this Hindu-dominated Mamudkati and its surrounding villages was very negligible, with superstition griping the people while child marriage and drug abuse being the order of the day.

Finally, Anirban Library has become a force against these social evils, said locals.

“On December 10, 1990, Anirban Library began its journey. It was not just an ordinary library but became a socio-cultural movement for the people in the locality. Anirban Library has made a difference in the culture and society as the changes are being felt at present,” said its general secretary Pravat Devnath.

“We’re giving stipends to poor students and have set up a free medical camp, too. Here boys and girls can grow up with dreams and are shown the path to become good human beings,” said Ganesh Bhattacharya, general secretary of Anirban Library’s advising committee.

This library allows people in this remote village to use the internet for free. Children as well as old people in the area are greatly being benefited by the library, he added.

There are around 7,000 books in the two-storey library and the number is increasing every day, said Shondha Rani Haldar, secretary of the library.

Neelima Dhali Rani, headteacher of Mamudkati Government Primary School, said, “Boys and girls run to the library once their classes are over. Not only they can read books and the daily newspapers, but they also can sing, dance and use computers in the library. They get free private tuitions and even stipends if they excel in their studies. The village is now known for Anirban Library as the entire area being enlightened by it.”

The library has really become popular and people from surrounding areas are coming here, said Shomiron Dey, president of Anirban Library, adding that the road to reach the library is in a bad shape and hoped the authorities concerned will take necessary measures to repair it.