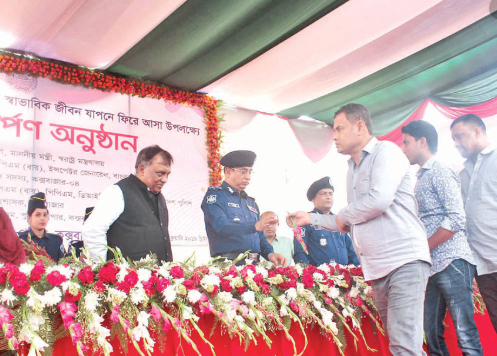 Over 80 robbers are scheduled to surrender and lay down their arms at Kalarmarchara Government Primary School in Maheshkhali upazila on Saturday.

Inspector General of Police Javed Patwary will also be present.

According to sources, the robbers will deposit some 150 firearms, 2,000 bombs and sharp weapons to the administration during their surrender.

Already some 78 robbers have taken shelter at the safe home of police as of Friday and the number is likely to climb by 100 by Saturday, he added.

Quoting a robber, who is now staying at the Safe Home, the ASP said the arms made in ‘Zafar Arms Factory’ were supplied across the country.

MM Akram Hossain, a private TV channel journalist, said he along with his team worked taking risk to reach the arms factory.

ABM Masud Hossain, superintendent of Cox’s Bazar police, said Kalamarchhara union under the upaizla is a crime-prone area where all types of criminal activities, including murder, abduction and extortion, take place regularly.

A number of robber gangs, including ‘Khausarbar Group’ Kalabor Group’ and ‘Ayub Bahini’ its leaders and arms makers, are scheduled to surrender on Saturday, he added.

Sharif Badsha, chairman of Maheshkhali Upazila Parishad, said local people will heave a sigh of relief once the robbers surrender.