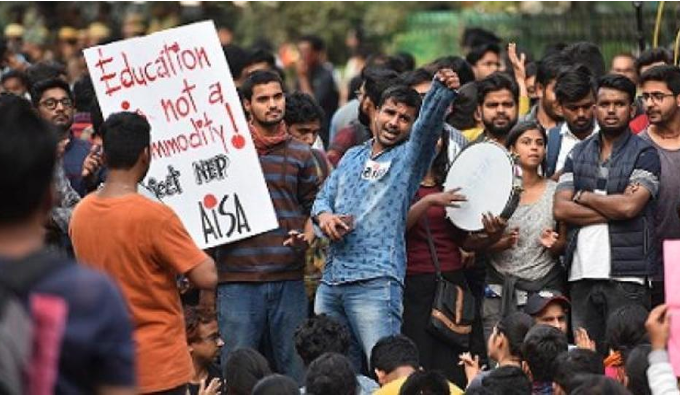 The Jawaharlal Nehru University in India has defended its move to revise hostel fee saying the varsity is having a deficit of more than Rs 45 crore and it is largely because of huge electricity and water charges and the salary of contractual staff.

“The JNU has a deficit of more than Rs 45 crore and it is largely because of huge electricity and water charges and the salary of contractual staff. The UGC no longer allows payments of salaries of contractual employees of the hostel from the salary head of the budget. The number of such employees in the hostels is over 450. The UGC has given clear instructions to JNU that all shortfalls in the non-salary expenditures should be met by using the internal receipts generated by the university. Thus, there is no alternative for the IHA than to collect service charges from the students,” said the university administration while issuing a fact sheet on the hostel issue on Thursday night.

Thirteen members of JNUTA executive committee met the MHRD-appointed committee in Shastri Bhawan and submitted a memorandum, citing that there was no possibility of normalcy on campus till hike in hostel charges is withdrawn and the problems in the university cannot be resolved till the current vice chancellor is in office. The teachers’ body has also raised allegations of “financial mismanagement and wasteful expenditure.”

“There are 17 hostels in JNU and it is important to note that all of them have been running smoothly for decades now. There does not seem to be any urgent cause for the proposed steep fee hike and no explanation has been forthcoming from the JNU administration about the sudden financial crisis that has necessitated such a steep hike in hostel charges,” JNUTA wrote in its memorandum. The MHRD committee is also expected to visit the university campus on Friday to hold another round of dialogue with the students.

The three-member committee appointed by the ministry of human resource development (MHRD) held a meeting with representatives from Jawaharlal Nehru University Teachers’ Association (JNUTA) on Thursday over the hostel fee hike issue even as 100 teachers announced their dissociation from the teachers’ body.

Till Thursday evening, at least 113 teachers had announced their dissociation from JNUTA over an array of issues including “student violence” against teachers and provosts. There are around 550 teachers in JNU.

“The trigger behind this move was unlawful detention of Vandana Mishra, associate Dean of Students, on November 8 by students. We had expected JNUTA to issue condemnation of such behaviour but it never happened. During their protests, students also gheraoed wardens and provosts. While hostel fee hike is a genuine issue and students can indulge in a democratic agitation, creating an atmosphere of fear for teachers is not the way to go about it,” said Aswini K Mohapatra, professor at the School of International Studies.

In a statement issued Thursday evening, the teachers also questioned the high-powered MHRD committee and said it was in violation of norms that govern universities. “The university did not approach UGC or MHRD to intervene and solve the problem. Taking suo-motu action, the committee seeks to engage all stakeholders. The administration has been reduced to one stakeholder. So the authority of chancellor and vice chancellor have been brazenly undermined,” the teachers’ said in their statement.

JNUTA president DK Lobiyal said the association was not aware of any such decision by a section of teachers. “We have not received any memorandum from them so far. We will respond to it accordingly when we do,” he said. Lobiyal also said members of the high-powered MHRD committee heard their concerns over hostel fee hike on Thursday.

“ABVP is against the ongoing series of fee hikes across several educational institutions and would request their respective administrations to refrain from such inexcusable conduct,” said Siddharth Yadav, secretary of ABVP Delhi.

Manish Jangid, secretary of ABVP in JNU, said, “While JNUSU has thrown in the towel, we continue to hold out. The manner in which the police authorities stymied our protest was undemocratic. We call for the HRD Minister to either unconditionally comply with our demands or resign forthwith.”