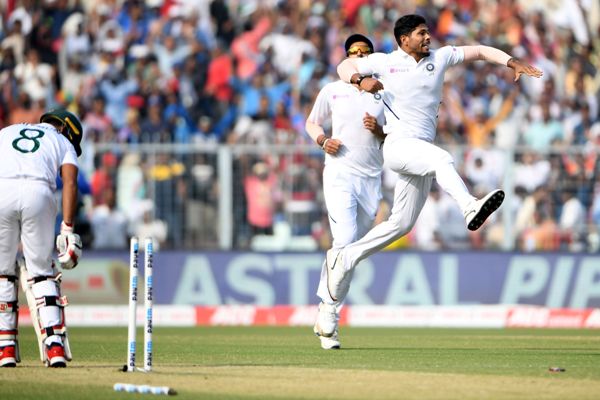 Bangladesh suffered batting collapse once again as they lost six wickets just in 60 runs in their first day-night Test against India at the Eden Gardens in Kolkata on November 22.

Mominul Haque, the Bangladesh captain, won the toss and opted to bat first. But the Bangladeshi top-order batsmen failed to prove their mettle to bat against pink balls as they lost four wickets in just 26 runs.

Mominul Haque, Mohammad Mithun and Mushfiqur Rahim suffered a duck each. The other batsman, ImrulKayes, scored only 4 runs.

Ishant Sharma took the first wicket removing Imrul for lbw. Right after that, Umes Yadav sent Mominul and Mithun backed to the dressing during the 11th over. Mohammad Shami removed Mushfiqur dismantling his stumps off a wonderful delivery.

Bangladesh lost four wickets within 12 overs of the game.

Before leading up to this game, Bangladesh suffered a big defeat in the first game in Indore by an innings and 130 runs.

Prior to that, the Tigers faced India in a three-match T20 series what they have lost 2-1.

However, in the first match of the T20 series, Tigers were tremendous and they registered their first-ever T20 win over India riding on the unbeaten fifty of Mushfiqur Rahim.