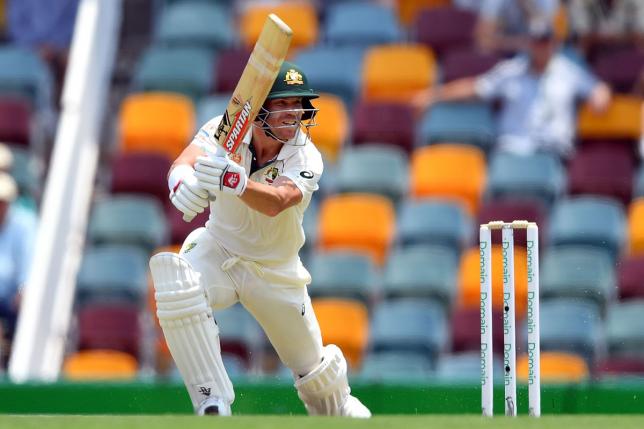 Openers David Warner and Joe Burns dominated the Pakistan attack despite a fiery debut from 16-year-old Naseem Shah to put Australia in a strong position at lunch on the second day in the first cricket Test on Friday.

Australia were 100 for no wickets at the break in reply to Pakistan's first innings total of 240 at the Gabba ground in Brisbane.

Warner, who endured a miserable Ashes tour of England earlier this year, was on 52 while Burns was not out 41.

The pair were largely untroubled throughout the session, scoring at just over four runs an over on a morning when the Pakistan bowlers could get neither swing nor spin.

Naseem looked like he belonged on the big stage with a bristling first spell in Test cricket.

But while he regularly reached speeds of over 145 kilometres (90 miles) per hour, the lack of movement meant Warner and Burns were able to play him with relative ease, although he smashed Burns on the elbow two balls before the lunch break.

Warner, who averaged just 9.5 on this year's Ashes tour, triggering calls for him to be dropped, brought up his half-century off 78 balls with four boundaries.

After a cautious start, he looked more and more comfortable as the session wore on, using his feet well and playing with his customary aggression.

He was well supported by Burns, who was brought back into the Australian team after missing the Ashes tour.

Burns hit six boundaries in front of his home crowd at the Gabba to reward the selectors' faith.