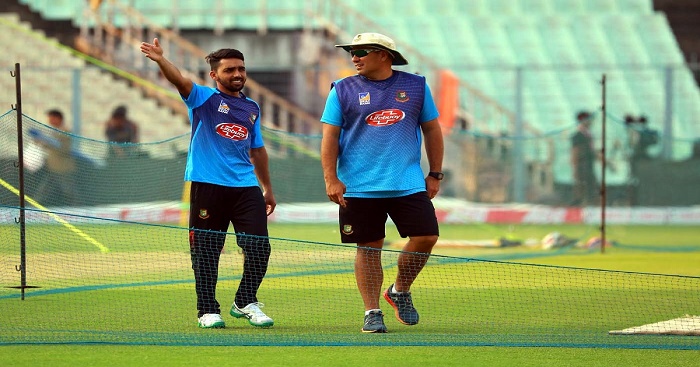 Bangladesh Test captain Mominul Haque is more wary about grabbing the opportunities that come along the way in the Kolkata Test starting from Friday rather than thinking too much about the difficulties of facing the pink ball from the world-class fast bowlers of India.

The Tigers had a practice session under the light on Thursday evening ahead of the first-ever day-night Test in the subcontinent. Before Bangladesh, India had the last practice session with the pink ball in the afternoon.

“We had good preparations for this Test. We’re really excited about this game against India. They’re a stronger side. But we’re also prepared well to grab the opportunities what will come along the way. We’re more focused on that than thinking much about their strength,” Mominul told the media in the pre-match media interaction.

“Everyone in our team wants to make this Test memorable. We’re really excited about this game. But we’re focusing more on our game. As the professional cricketers, we are not supposed to be affected by external affairs,” he further added.

Bangladesh have never played a day-night Test before like India. The captains of both the teams said the pink ball can make their job tough. Despite admitting it, both the captains manifested their confidence to come up with the expected performance.

In the first Test of the series, Bangladesh were defeated by an innings and 130 runs. Mominul said they are not bothered about the result that they endured in the last game. They rather are concentrating on learning from the mistakes they made.

“You can’t think much about the previous match that you won or lost. You just have to come up with your best effort to do well. I think we have many things to learn from the previous game and we’re trying to put our best foot forward in the next game,” the Bangladesh captain further added.

He believes the main challenge of the pink ball game is to play under the light.

According to him, the extra glaze of the pink ball might create a problem for the batsmen to spot the ball properly, and the same thing can happen for the fielders.

Mominul also said they required a practice game before the first-ever day-night Test against India.

Bangladesh Cricket Board (BCB) had hosted a day-night First-class game with the pink ball back in 2013. But none of the current bunch of the national players participated in that game.

“Had we got a chance to play a practice game, it would have been better. I think before any day-night Test in future, we’ll get at least one practice game,” he said.

Before heading to the Kolkata Test, Bangladesh lost the first Test of the series by an innings and 130 runs. However, Mominul said they are confident enough to come up with a better performance in Kolkata.

Before heading to this historic game, Bangladesh faced Test giant India in 10 matches but failed to record any win.

The pink ball Test will start after an opening programme which includes the presence of Bangladesh’s Prime Minister Sheikh Hasina and Chief Minister of West Bengal Mamata Banerjee. They will be in the field before the toss to introduce with the players from both teams.

Prime Minister Sheikh Hasina, West Bengal Chief Minister Mamata Banerjee, former Indian captain Sachin Tendulkar will get the honour of ringing the bell of the Eden Gardens, and right after that, the match will take the field.

The historic pink-ball Test will kick off at 1:30pm (Bangladesh time) and will be telecast live by Gtv.