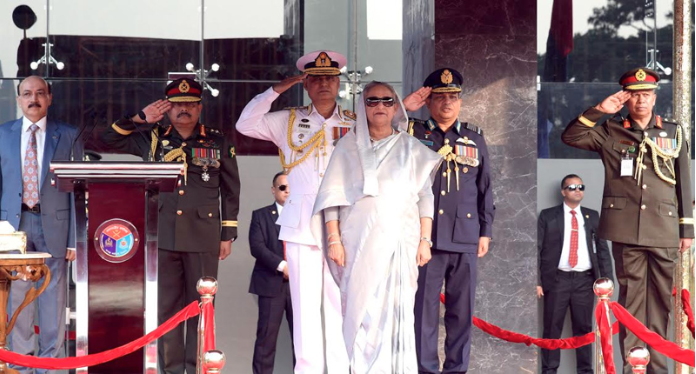 Prime Minister Sheikh Hasina on Thursday said the ongoing drive against corruption, terrorism and militancy will continue, and urged asked the Bangladesh Armed Forces to continue their role in building the country.

“If peace and order prevail in the country, the progress is inevitable. So, the ongoing drive against terrorism, militancy and corruption will continue. We want to ensure that the people of the country live in peace and safety,” she said.

The Prime Minister was addressing a civic and military gathering at a reception arranged in Senakunja of Dhaka cantonment on the occasion of the Armed Forces Day 2019.

Sheikh Hasina also asked the Armed Forces to continue their contributions towards upholding the democratic tend through their efforts maintaining the maximum sense of responsibility and the discipline.

“I believe our Armed Forces will continue to play their role in building the country following the chain of command and being accountable to the Constitution under all circumstances,” she said.

The PM urged all, including the Armed Forces, to work together to develop Bangladesh as a developed and prosperous country being imbued with patriotism.

Highlighting the socioeconomic uplift of the people and progress of the country, Hasina said Bangladesh has already got recognition as a developing country after coming out from the least-developed status. “We’ll have to move forward retaining this recognition (status) of the developing country.”

“If we can bring down the poverty rate at 15-17 percent, we’ll definitely get recognition of the poverty-free country,” she said.

Mentioning that Bangladesh economy is now enough strong, Hasina said, “We want to stand our own feet. We want to build Bangladesh by ourselves. I want you all to build your own country by working sincerely from their respective position.”

PM’s Security Affairs Adviser Major Gen (retd) Tarique Ahmed Siddique and the chiefs of the three services stood beside the Prime Minister when she addressed the reception.

Earlier, the Prime Minister opened the newly expanded and reconstructed Senakunja there.

On this day during the War of Liberation in 1971, the Bangladesh Armed Forces comprising Army, Navy and Air Force, came into being and launched an all-out attack on the Pakistani occupation forces which sped up the victory in the Liberation War.

Since the independence of the country, this historic day is observed as the Armed Forces Day.