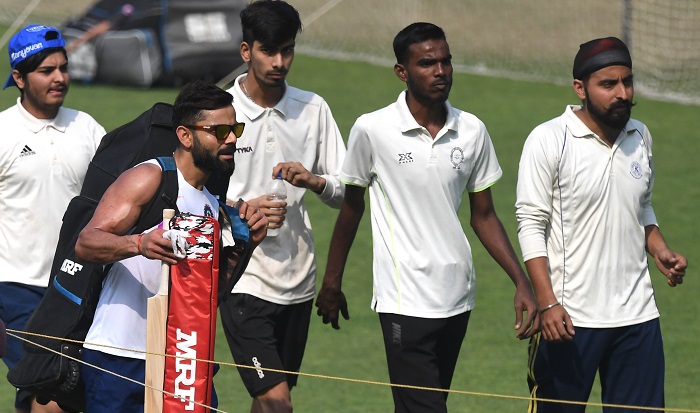 Skipper Virat Kohli said Thursday he welcomed the "buzz" around India's grand day-night Test debut but said that pink-ball matches should not become a regular occurence.

India begin their pink ball journey against Bangladesh on Friday in Kolkata, with the first four days sold out, contrasting with day-time Tests in India when crowds are often sparse.

"This can be a one-off thing. It should not in my opinion become a regular scenario, because then you are losing out on that nervousness of the first session in the morning," Kohli said at Eden Gardens.

"The entertainment of Test cricket lies in the fact that the batsman is trying to survive a session and the bowler trying to set a batsman out," he told reporters.

But he added: "It's great to create more buzz around Test cricket."

Day-night Tests, aimed at increasing crowds and TV audiences for the longer format, were successfully introduced in 2015 when Australia played New Zealand in Adelaide.

But until now India has kept away, with the Board of Cricket for Control in India last year refusing to play a day-night Test in Adelaide.

"Obviously we wanted to get a feel of pink-ball cricket. Eventually it had to happen," said Kohli.

India lead the two-match series 1-0 after thrashing Bangladesh in a daylight Test at Indore inside three days -- to largely empty stands.

A striking spectacle is planned for the start of the Test on Friday -- it is also Bangladesh's pink ball debut -- with Bangladesh prime minister and the local chief minister set to begin proceedings by ringing the stadium bell.

Kohli said the occasion reminded him of the 2016 World Twenty20 clash with arch-rivals Pakistan at Eden Gardens which witnessed a host of big names including current Imran Khan, former cricketer and now Pakistan's prime minister, in attendance.

The Indian star batsman said he was excited to become part of history but after practising with the pink ball pointed out a few challenges compared to the regular red ball used in day Tests.

"The one thing that surprised me was the fielding sessions. How in the slips the ball hit your hand so hard, it almost felt like a heavy hockey ball," Kohli said.

"It really felt like that on the hand and it's definitely because of the extra glaze of the ball. It's definitely much harder, and it felt a little heavier."

"I think in India we have one big factor, which is dew, (for) which something will have to (be done)," said Kohli.

"Spoke to the match referee yesterday. It's something we'll have to speak about and discuss as we go along in the game. You can't really predict how much mopping or how much cleaning of the dew is required at which stage."