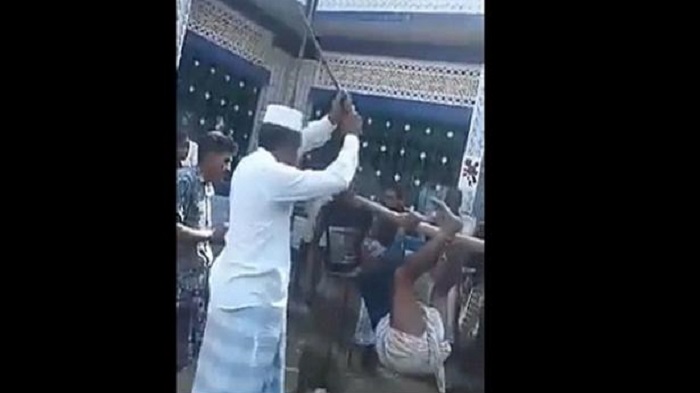 A sensational video clip of Zakiganj Upazila Parishad chairman Abdus Salam alias Fakir Mastan of touring a youth brutally tying him to a hanging bamboo pole at the area in Sylhet has gone viral in social media platform Facebook.

In the 25-second video, Abdus Salam was seen beating the youth mercilessly with a stick in the name of village arbitration.

A Facebook page, named Sbd tv, posted the video of the brutal torture on its timeline on Tuesday, triggering criticism in the social media and public outrage in the area.

The tortured youth was identified as Afzal, hailing from the upazila. The video clip has already reached local police.

Superintendent of Police (SP) in Sylhet Mohammad Farid Uddin said, “The incident of the torture took place a few months ago. We have already called Afzal to look into the incident.”

Police would arrest accused Abdul Salam after receiving complaints from the victim, he added.

In June, 2015, a child, named Sheikh Md Samiul Alam alias Razon, was brutally beaten to death after he was allegedly blamed over theft in Sylhet. The incident provoked a firestorm of protests across the country.