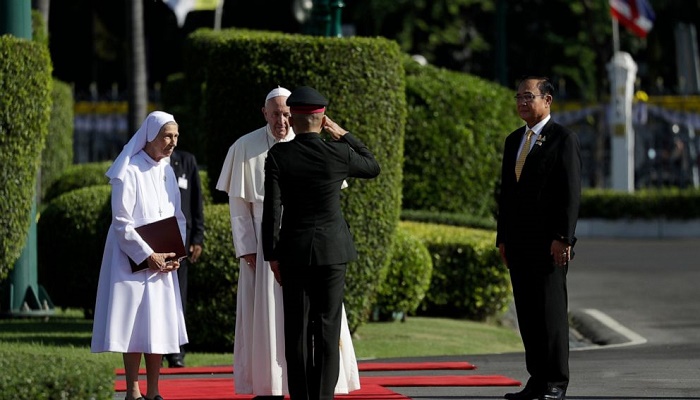 Pope Francis called Thursday for women and children to be protected from exploitation, abuse and enslavement as he began a busy two days of meetings in Thailand, where human trafficking and forced prostitution help fuel the sexual tourism industry, reports AP.

Francis pleaded for action against one of the region’s greatest scourges at the start of his weeklong visit to Asia.

He praised the Thai government’s efforts to fight human trafficking in a speech delivered at host Prime Minister Prayuth Chan-ocha’s Government House offices. But he appealed for greater international commitment to protect women and children “who are violated and exposed to every form of exploitation, enslavement, violence and abuse.”

The United Nations considers Thailand a key trafficking destination as well as a source of forced labor and sex slaves, who are trafficked at home or abroad.

The Thai government has insisted it has made significant progress in cracking down on human trafficking.

Prime Minister Chan-ocha didn’t make any reference to the problem in his remarks to Francis, though he stressed that Thailand had made great strides in promoting human rights.

Francis had a busy schedule on his first full day of activities of his weeklong tour, which will also take him to Japan.

Friday’s agenda is far more church-based, with meetings with local Thai clergy, Asian bishops and separately a meeting with leaders of different Christian denominations and other faiths.