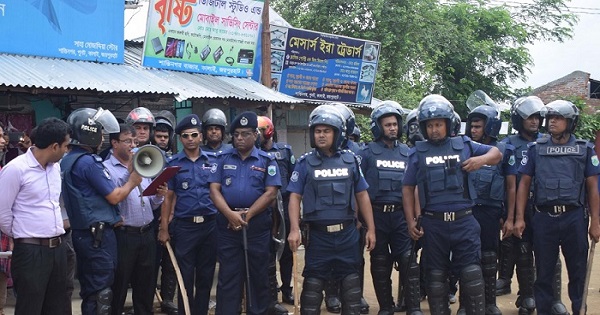 The local administration on Wednesday night imposed Section 144 for three-day banning all public gathering in some areas of Tangail town after two Awami League factions called for programmes at the same spot.

Tension is mounting in the city as activists of both the camps are flexing their muscles to confront the other.

Muhammad Shahidullah, additional district magistrate of Tangail, imposed the embargo under section-144 in and around Shaheed Smrity Pouro Udyan, Nirala Intersection, Old Bus Stand areas along with some other important streets in the town.

A large number of police have been deployed in and around the venue to maintain law and order.

A group led by Amanur Rahman Rana, former AL lawmaker of Tangail-3, called for a programme marking the 16th death anniversary of his elder brother Aminur Rahman Khan Bappy, who was also a leader of the party and killed near his home.

On the same venue at the same time, a rival group under the banner of Nirjatito Awami Paribar, along with local CNG-run auto-rickshaw workers and diesel-run three-wheeler workers, called for a programme demanding justice for freedom fighter Faruk Ahmed, whose body was found near his College Para house in the town on January 18, 2013.