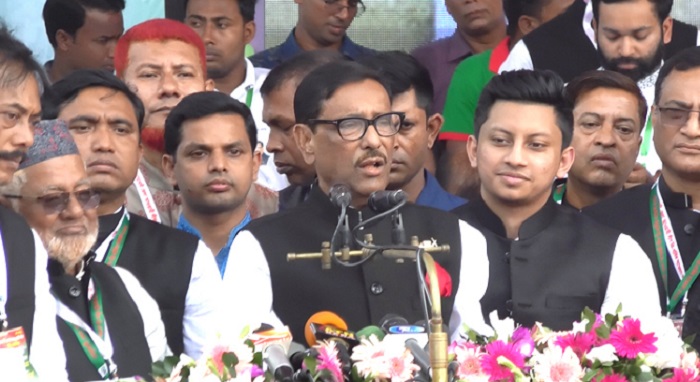 Terming Bangladesh Nationalist Party (BNP) as “Rumour-monger Party”, Awami League General Secretary Obaidul Quader on Wednesday alleged that the BNP has been spreading rumours one after another to create a volatile situation in the country.

Failing to do anything with onions, they targeted the rice market and hatching conspiracy. In their latest attempt, they tried to spread ruomours in the salt market and once again they faced failure. Finally, the BNP started a conspiracy with the Road Transport Act.

Obaidul Quader also the Road Transport and Bridges Minister made these allegations against BNP while addressing at Noakhali District Awami League's triennial council at Shaheed Vulu Stadium in Noakhali on Wednesday (November 20).

Coming down heavily on BNP leader Mirza Fakhrul Islam Alamgir, Obaidul Quader said you are instigating transport workers through raising questions over the rationality of the new transport law while they are observing work absentia to press home their various demands.

The AL leader said no conspiracy will work as the government is working for the well being of the country people asking Mirza Fakhrul to go slow with their conspiracies and instigations.

He mentioned that the new transport law was formulated to bring discipline on the road, not to punish or fine someone.

The Home Minister sat in a meeting with the owners of the transports and we hope they will withdraw their strike after the meeting.

Each and everyone has to follow the law for maintaining discipline on the road. There is no reason to be worried if we follow the rules.

Calling upon the owners and workers of the transport sector, Obaidul Quader urged them not to punish common people by enforcing transport halt. Don't punish people in fear of their own punishment. Please do not make people sufferer.