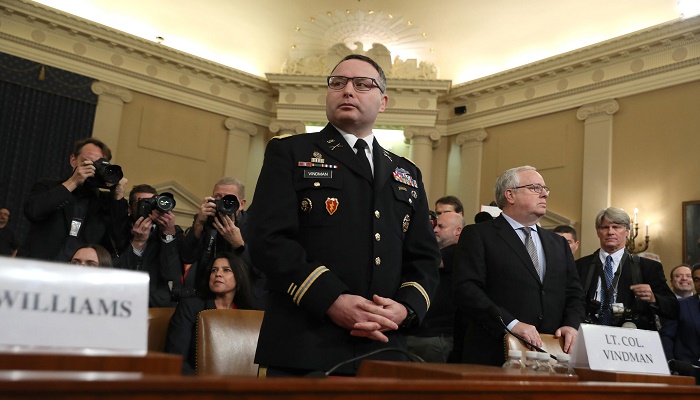 The White House attacked its own top Ukraine official as he testified to an impeachment hearing that a phone call made by the president was "improper" and had left him in "shock", reports BBC.

"I couldn't believe what I was hearing," Col Vindman said.

The hearings are investigating whether Mr Trump abused his presidential power.

A decorated Iraq war veteran who serves in a senior role on the US National Security Council (NSC), Col Vindman testified before the House on Tuesday in his Army dress uniform.

As he described his reaction to hearing a call between President Trump and his Ukranian counterpart, President Volodymyr Zelensky, Col Vindman came under attack by the official White House Twitter account, which posted a critical quote from his former boss on the NSC questioning his judgement.

Republican congressmen pressed Col Vindman on the remark and questioned his loyalty to the US - asking about instances in which Ukrainian officials approached him about becoming the country's defence minister.

The impeachment hearings are an effort by Democrats to establish whether Mr Trump withheld US military aid to Ukraine in order to pressure the country's new leader, Mr Zelensky, into announcing a corruption inquiry into Joe Biden, Mr Trump's leading Democratic rival for the US presidency.

If the president were to be impeached by a majority vote in the House of Representatives, he would face a trial in the Senate which could remove him from office, although the Republican controlled chamber would be unlikely to vote against him.

Col Vindman was among the US officials who listened in on the 25 July call between the two leaders. He is a decorated Iraq war veteran who was born in Ukraine; his family moved from the Soviet Union to the US 40 years ago.