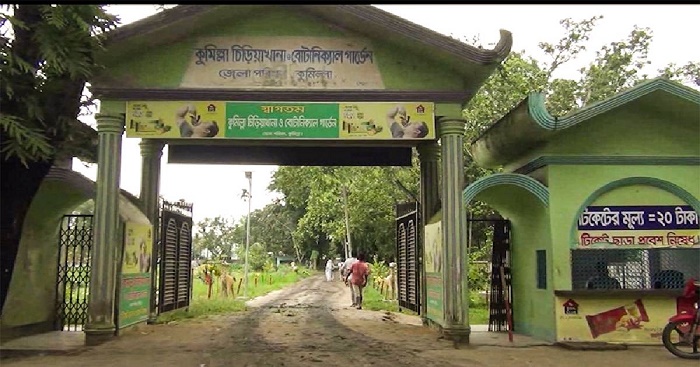 Cumilla Zoo and Botanical Garden, which was established to provide recreational facilities to the residents of the district away from the monogamy of everyday life, is now in an very poor shape, thanks to its mismanagement.

The recreational establishment is losing visitors day by day due to the awful condition, forcing the lessee to count losses.

The number of population in the district is over 65 lakh. There are a few recreational centres or parks in the district for their entertainment. Of them, Cumilla Zoo and Botanical Garden located at the DC Bangla Road is one of them. It was established on 10.15 acres of land in 1986.

During a visit, it was found that there is no animal in most of the cages at the zoo while there were heaps of garbage at the botanical garden. Besides, waterlogging inside the establishment remains all the year round.

Although there are cages in the zoo, most of them are either abandoned or empty. And the botanical garden has turned into a water reservoir as perennial waterlogging remains throughout the year.

Garbage is being dumped in front of the zoo entrance and there is no mentionable plant in the botanical garden. All the roads inside are full of potholes and waterlogged.

Besides, there is no recreational arrangement, including any ride, for children.

As a result, the number of its visitors is declining day by day as they find it wastage of time and money. Only a handful of visitors are seen going to the recreational centre.

Anis Ahmed, the leaseholder of Zoo and Botanical Garden, said they are counting losses every year due to its poor condition.

The number of visitors will rise significantly if animals of different species are brought for the zoo and trees are planted at the botanical garden after filling the low-lying portions with soil, he said.