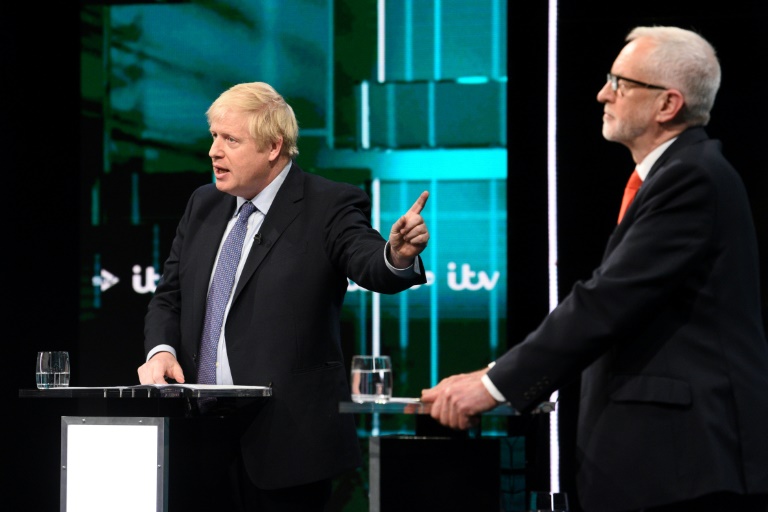 Boris Johnson and Jeremy Corbyn have clashed over Brexit in the first TV election debate of the campaign.

Johnson promised to "end this national misery" and said Labour offered "only division and deadlock".

Corbyn said Labour would "get Brexit sorted by giving you, the people, the final say".

The two leaders also locked horns over the NHS, trust and leadership, the future of Scotland - and the Royal Family.

BBC political editor Laura Kuenssberg said it was not clear if either men had won or lost the debate but it was striking how the audience had been ready to laugh at their statements.

A snap YouGov poll suggested the public were evenly split on who had won the debate, "with most Labour voters thinking Jeremy Corbyn won, most Conservative voters thinking Boris Johnson won".

SNP leader Nicola Sturgeon said she was "not impressed at all" by the debate and said neither man was "fit" to be prime minister.

Liberal Democrat Leader Jo Swinson dismissed the performances of Mr Johnson and Mr Corbyn as "bluster and diversion from both of them".

Green Party co-leader Sian Berry expressed dismay at the "climate chaos" issue being "relegated to the quickfire round in that debate".

And Brexit Party leader Nigel Farage said Corbyn was the "better debater" but criticised him for not saying if he would Leave or Remain in a future referendum.

The Lib Dems and SNP lost a court challenge to ITV's decision not to include their party leaders in the debate.

The Conservative Party received criticism for rebranding one of its Twitter accounts as "factcheckUK" during the debate.