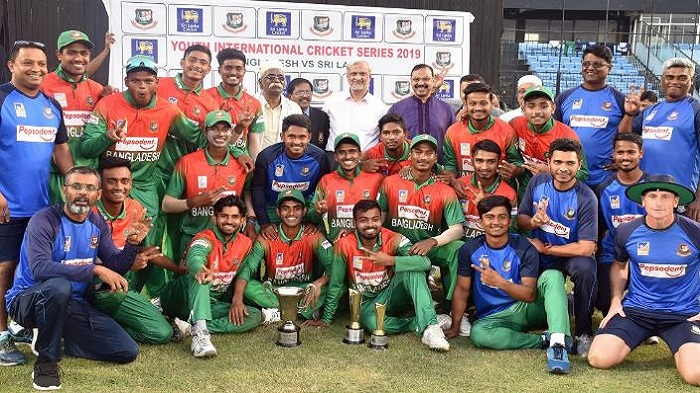 After winning the five–match Youth ODI series 3-0, Bangladesh Under-19 Cricket completed a 4-0 whitewash beating Sri Lanka Under-19 side by 50 runs in the 5th and last match at the Zahur Ahmed Chowdhury Stadium in Chattogram on Tuesday.

Young Tigers started the Youth ODI series beating Sri Lanka by 5 wickets in the 2nd match at Sheikh Abu Naser Stadium in Khulna as the first game was abandoned at the same venue due to cyclonic storm ‘Bulbul’.

The hosts took 2-0 lead thrashing the Islanders Sri Lanka by a huge margin of 161-run in the 3rd match at the Zahur Ahmed Chowdhury Stadium in Chattogram last Thursday and clinched the series 3-0 beating the visitors by 5 wickets in 4th match at the same venue last Sunday.

Electing to bat first in the day’s match, the Young Tigers scored 283 for 7 in 50 overs, riding on the 3rd consecutive century by Towhid Hridoy in the series.

Hridoy smashed 111 runs off 102 deliveries hitting 3 fours and 5 sixes while Prantik Nawrose Nabil added 65 off 77 featuring 4 fours and 2 sixes for the hosts.

Rohan Sanjaya bagged 2 wickets for 57 while Rodrigo, Wijesinghe, Perera and Thilakaratne took one wicket each.

Towhid Hridoy was adjudged the man of the match as well as man of the series.

Earlier, the two-match four-day Youth Test series between the two teams ended in a draw.