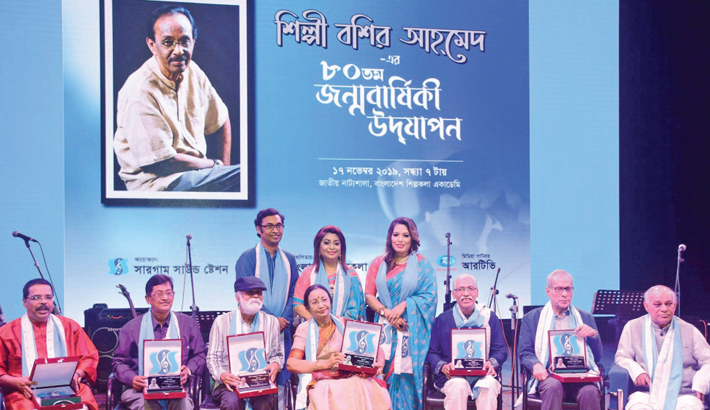 Six erminent cultural personalities have been honoured with ‘Bashir Ahmed Award’ for their outstanding contributions in their respective fields. The award giving ceremony was held at Bangladesh Shilpakala Academy in the capital on Sunday.

The award has been introduced by Humaira Bashir and Raja Bashir, children of the late noted singer Bashir Ahmed. They also celebrated Bashir Ahmed’s 80th birthday at the event.

Ferdousi Rahman received the life time achievement award. After receiving the award, Ferdousi  said, “I have awarded so many times in my life. But this is the first time I have received an award which named after a prominent singer. I am really happy. Thanks Humaira and Raja for this noble initiative.”

On the other hand, Humaira and Raja said, “We introduced the award this year in memory of our father Bashir Ahmed. We want to give this award every year. We also express our gratitude to all of them who graced today’s ceremony by their presence.”

The award ceremony was begun with a discussion on Bashir Ahmed. Eminent singers and music composers including Khurshid Alam, Gazi Mazharul Anwer, Azad Rahaman and Kanak Chapa spoke on the occasion. Besides, different artistes rendered songs composed and recorded by Bashir Ahmed at the event.

Bashir Ahmed was a playback singer who started his career from Pakistani film industry. He was born in Calcutta in 1939. Then he migrated to Dhaka, East Bengal during the Partition period and started his singing career.